Lesson 1 of 7By Nikita Duggal 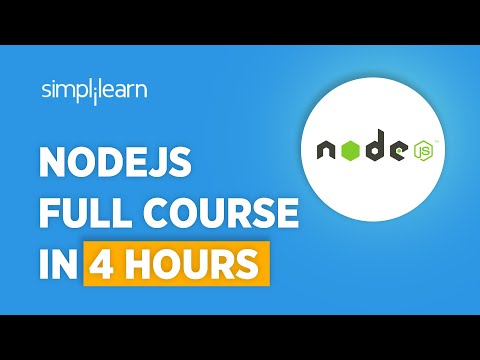 Node.js is a compelling JavaScript-based platform that's built on Google Chrome's JavaScript V8 Engine. It is used to develop I/O intensive web applications, such as video streaming sites, single-page applications, online chat applications, and other web apps. Large, established companies and newly-minted startups alike (Netflix, Paypal, NASA, and Walmart, to name a few) use it often. Eager to know more? This tutorial will help you in getting started with node.js.

Node.js is open-source and completely free, and thousands of developers around the world use it. The platform brings plenty of advantages to the table, making it a better choice than other server-side platforms, like Java or PHP.

First, we'll go through some of the basic concepts required in getting started with node.js, and then we will create our own Weather App. This application will enable us to search for weather conditions anywhere in the world.

Let us now begin our tutorial on NodeJS by understanding what is node.js.

Node.js is an open-source, cross-platform JavaScript runtime environment and library used to run web applications outside the client's browser. Ryan Dahl developed it in 2009, and the latest version, v13.8.0, was released on Jan. 30. Node.js is used to create server-side web applications and is perfect for data-intensive applications since it uses an asynchronous, event-driven model.

Now that we have learned the basics of getting started with node.js, let us next learn the architecture of node.js

Node.js uses the "Single Threaded Event Loop" architecture to handle multiple concurrent clients. The Node.js processing model is based on the JavaScript event-based model, along with the JavaScript callback mechanism.

When you install Node.js, NPM is also installed. The following command in CMD can verify if NPM is properly installed: npm --version

Now that we have covered what is Node.js, Node.js Architecture, and NPM as part of this Node.js tutorial, let us now look at different Node.js Modules.

Node.js has a built-in module called HTTP. This module enables Node.js to transfer data over the internet. We use the require() method to include the HTTP module in an application.

This is what the output looks like on the web browser when we go to the URL with the correct port.

Every action on a computer is considered an event. For example, opening a file, connecting to the internet, etc. Node.js has a built-in events module, where users can create, trigger, and listen for events.

Let's look at a basic implementation of the Events module in a Node.js application:

The 'myEventHandler' method is called, and the console shows the output when you trigger the event using the 'emit()' method.

We will now cover an important aspect of the Node.js application framework as part of this Node.js tutorial. The Node.js Express Framework.

Next  up in the getting started with node.js tutorial we will look at node.js. Express is a flexible Node.js web application framework that provides a wide set of features to develop both web and mobile applications. It's a layer built on the top of Node.js that helps manage a server and routing.

Let's have a look at some of the core features of the Express framework:

Let's look at an example of a simple "Hello World" program developed using Express Framework to gain a better understanding.

Next in the getting started with node.js tutorial we will look at how Node.js can be used with various databases to enable web applications to store data and perform operations with that data.

MySQL is among the more popular databases that can be connected to Node.js. It is the most popular open-source relational SQL database management system. It also is one of the best RDBMS used to develop various web-based software applications.

You can install the MySQL module using the following command prompt, and then add it to your file:

MongoDB is also a popular database choice to connect with Node.js. It is an open-source document database and a leading NoSQL database. This database is often used for high-volume data storage.

You can install the MongoDB module using the following command prompt and then add it to your file:

MongoDB Compass is a tool that lets users connect to a database and view or edit the data from the dashboard. This tool is installed while installing MongoDB.

The next section of this Node.js tutorial shows you how to create an application using Node.js.

We are going to make our Node.js-powered weather application: Weatherly. This application will enable us to search for weather conditions anywhere in the world.

1. Download the Node.js from https://nodejs.org/en/download/. Select the installer according to your operating system and environment.

4. When we install Node.js, NPM (Node Package Manager) is also installed. NPM includes many libraries that are used in web applications, such as React. Verify whether it is installed or not with the following command in CMD: npm --version

That's all we need to do to install Node.js in a Windows system successfully!

For this project, we'll be using the free OpenWeather API. Head over to this link and sign up for an account with an email and a password.

Once signed in, select the API Keys tab. Here, you can create a key on the right-hand side of the page. Enter a name for your application and select generate. The API key will appear on the left. We will use this key later in our code.

Install a text editor of your choice. We are using Visual Studio Code in this tutorial, but you can also use other editors, like Atom and Sublime Text, if you are more comfortable with those.

2. Open the newly created directory in VS Code, and inside the terminal, type npm init to initialize the project. Press the Enter key to leave the default settings as they are.

3. Within the weatherly directory, create a file named server.js, which will contain the code for our application.

Create a file called server.js in the project directory. This file in our application acts as the main server because it contacts OpenWeatherMap using the API key and returns the weather conditions of the inputted location.

Let’s go ahead and learn what task each snippet of code carries out in this file.

Instead of responding with text when someone visits the root page, we'd like to respond with an HTML file. For this, we'll be using EJS (Embedded JavaScript). EJS is a templating language.

To add this feature to our application, we have to install it using the terminal the same way we added modules. Use this command: npm install --save ejs

EJS is accessed by default in the views directory. Create a new folder named views in the application directory. Within that views folder, add a file named index.ejs. This is how the project directory should look:

Now, let's go ahead and add the code for this file and then learn what exactly each line of code does.

The above code is exactly like what you would write to create an HTML form. Since this is not an HTML tutorial, I'll explain only the EJS part of the code:

You can add the following CSS code to your application to make it look exactly like the one in this Node.js tutorial. You are free to tweak the CSS styles according to your preferences, too.

Add the following CSS styles in the style.css file and keep the file inside the public/css folder inside the project directory to make the styles work with the application.

Styles from this codepen:

Next in the getting started with node.js tutorial let’s focus on the industry trends. Node.js developers are in demand around the world due to the wide adoption of this JavaScript library. It is among the top 10 most in-demand jobs, according to Forbes.

In the last section of this Node.js tutorial, let us look at some of the industry trends and demands associated with Node.js.

With adopters such as Netflix, PayPal, and other tech companies, Node.js has seen an exponential increase in web development.

The popularity of Node.js is also due to the fact that it's built in JavaScript. Since JavaScript is the most popular programming language, as evident from the survey conducted by Stack Overflow in 2019, many developers can start working on the Node.js library without too steep of a learning curve.

The average salary for a Node.js developer in India is ₹6,13,000 per year!

The average salary for a Node.js developer in the United States is $104,964 per year!

To sum up all that’s required in getting started with node.js, check out the Node.js tutorial video.

In this tutorial, you have learned about Node.js architecture, Node.js Modules, creating applications with Node.js and all the basics of getting started with node.js. If you are wondering how to obtain the skills necessary to take advantage of its rising popularity, there are some great options to learn this exciting and practical skill set at your own pace. Simplilearn's Node.js Certification training course will give you a great foundation in this popular platform, combining live, instructor-led training, self-paced tutorials, and hands-on projects to help you become career-ready upon completion. Get started today and seize your future!