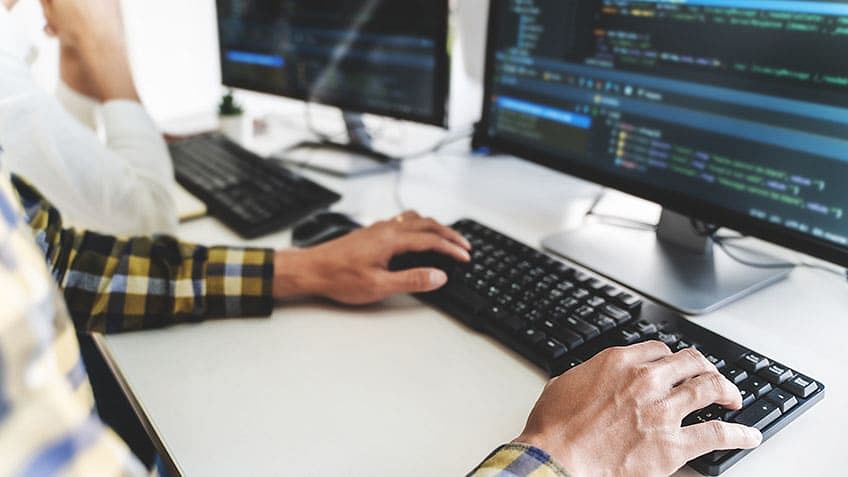 The onClick handler in React enables you to call a function and performs an action when an element is clicked in your app. It is the cornerstone of any React app. Before discussing the onClick event in ReactJs, first, let us understand what event handlers are.

Generally, in JavaScript, event handlers are used to determine which action is needed after firing the action, such as clicking any button or changing with text input. The users can interact with our ReactJS application through the event handlers.

Whenever the user clicks a button or any element within our application, the onClick event calls a function, and the called function triggers an action. The event handlers in React always appear within the curly braces.

Now let us see some examples.

There is an important difference between using onClick in React and onClick in HTML. To avoid the default behavior in HTML, we simply return false, but in ReactJS, the preventDefault method needs to be called explicitly.

Now let us see an example code implementation for avoiding the opening of a page from a link by default in HTML:

Now, let us see how we can do this in React Application:

console.log('The link has been  clicked.');

The onClick is an event handler for the target element within our React application. Generally, this event handler specifies which function must be executed after that particular element is called. We add the onClick event handler to the elements as the attributes.

alert("Welcome to the world of Programming!");

In the above code, we can see a function called GreetAlert() which we had defined earlier, and then we pass the function within the onClick attribute of a button element in our react application. Whenever the user clicks the “Click to view the alert!” button, there will be an alert popup on the top of the screen.

There are some events in React called synthetic events. Let us discuss this topic in brief.

The synthetic events provide high performance and consistency to the React application or its interface.

The synthetic events achieve consistency by normalizing the events to get the same properties across the different browsers or platforms. It is a cross-browser wrapper around the browser’s native event. Except for those events which work uniformly across all the browsers, including the preventDefault() and stopPropagation(), as the browser’s native event, it has the same properties. High performance is achieved automatically by these synthetic events by using delegation.

In the class components, the events can be handled by binding them within the arrow functions. Binding in the method function is allowed in the ES7 class properties.

Let us see an example of code implementation of arrow functions:

Now we are going to discuss some ways of handling events within the functional components:

Now let us understand how to use the inline function within a function component through an example:

Sometimes in our React application, we need to update our local states; this updating process of the states can be done within the onClick event handler.

Say for instance your React application requires you to update the local state in an onClick event handler.

Here, within our react application, we have a local state called count whose initial value is set to 0 and two buttons, increment and decrement, within our component. With the two buttons (one button will be for incrementing the count value and another button will be for decrementing the count value), we can modify and update the value of the local state using setCount() as shown below.

Within the same onClick event handler, we can pass multiple functions.

Now lets see an an example where we will call two functions within the same onClick event handler.

As shown in the code below, one function is for displayinng the greet alert and another one is for updating the local count state in our React application.

alert("Welcome to the world of programming!");

In the sample code below, we have a function called greetAlert which accepts a name parameter, and that parameter is used to show the name in the alert output.

Inside the onClick event, the synthetic events can be used directly.

In the example below, we will get the button’s values through e.target.value:

In ReactJS, only the DOM elements can have event handlers. If the event handlers are passed to components like NewCustomButton, we will get no response. What do we do in such situations? Here’s the solution.

First, in the NewCustomButton component, we need to render the DOM element, and then the onClick prop will be passed to it.

Let us see the code implementation for this:

Today, in this time and age, along with data structure and algorithms, your development skill is equally crucial to making a mark in the tech industry. Therefore, a tech professional should always keep himself updated with the latest technology and software in the field of Web Development.

Simplilearn offers some excellent Full Stack Web Development Certificate Courses that you can check out. These courses are designed to help you master both the front-end and back-end with different technologies and tools like AngularMVC and SpringBoot.