Lesson 10 of 24By Simplilearn 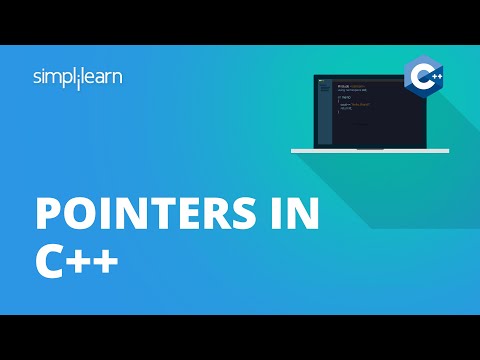 Pointers are one of the finest features of C++. Hence, it is essential to understand pointers in C++, so that you can make use of those features. A pointer works with memory addresses rather than the variables, which makes it more interesting. This tutorial will help you learn all you need to know about C++ pointers.

Why Do You Need Pointers in C++?

Pointers provide many capabilities to the C++ language. It offers features like referring to the same space in memory from over one memory location, i.e. you can change one location in the program, and it can reflect those changes in other parts of the program. Because of pointers, it is possible to have a more flexible memory allocation and deallocation. And you also use it in polymorphism and function pointers.

Now, understand what pointers in C++ are.

In C++, every variable has its unique address or location in the computer's memory, and this special address is called memory address. You can define a pointer as the variable that holds the memory address of some other variable. It allows the developer to deal with the memory.

Here 2000 is the address of a variable stored by the pointer, and 22 is the variable's value.

Declaration and Initialization of a Pointer

The basic syntax for the pointer in C++ is:

Here, the data type can be int, char, double, etc. The pointer name can be anything with the * sign. The * operator declares the variable is a pointer.

With this, the concept of pointers in C++ and its syntax is clear. So now you will learn about the dereference operator.

In this example, pointer ptr is storing the address of the variable a. With the help of a dereferencing operator, you print the value of a, i.e. 50. Using *ptr, you access the value that is at the address available in the pointer.

Attached below is the output of the above example.

Increment Operator: When you increment a pointer, the size of its type increments its address. For example, for incrementing an integer pointer whose address is 450, after increment, it will be 454 because the int type size is 4 bytes.

Decrement Operator: When you decrement the pointer, its address will be decremented by the size of its type.

Subtraction: When you subtract on a pointer, it will decrease the address by n* (size of) type.

Now you will learn how to use the C++ pointer to access elements of the array.

So, to access the elements of the array, you can use a dereference operator with the array name.

Here the array name is ‘records’ having five elements inside it. With the help of the array name, you print each element of the array because, as you know, ptr+1 will point to the next memory address. Similarly, records+1 will point to the next address, but you use the dereference operator along with it, that is why the value gets printed for that address. The same goes for records+2, records+3, and so on.

You can also traverse through array elements with the help of the increment operator.

Below is the output of the mentioned example.

Have a look at an example.

Since it now swapped the values with pointers, it should also reflect this swapped value outside the function.

As you can see in the above output, they swap values.

After reading this tutorial on C++ Pointers, you would have understood why you use pointers in C++, what is a pointer in C++, its declaration and initialization, and about the dereference operator in C++. You also learned about pointer arithmetic and how you can use pointers to access elements of the array with the help of some examples.

Do you have any questions regarding this tutorial on Pointers in C++? If you do, then please put them in the comments section. We’ll help you solve your queries. To learn more about Pointers in C++, click on the following link: Pointers in C++