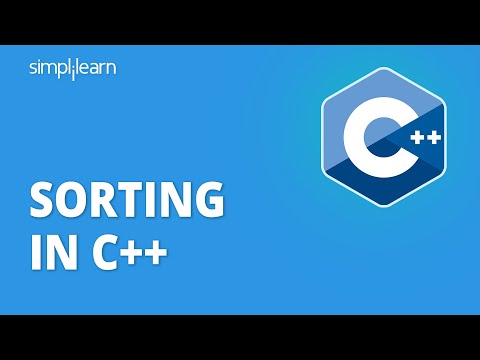 The sorting algorithms are widely used in computer science; it helps in arranging elements in order and also helps with many problems faced while writing the code. Sorting algorithms help in manipulating the data, which makes things easy for us. In this article, we will learn about Sorting in C++ and also about different sorting algorithms.

Sorting in C++ is a concept in which the elements of an array are rearranged in a logical order. This order can be from lowest to highest or highest to lowest. Sorting an unsorted array helps to solve many problems such as searching for the minimum or maximum element, etc.

Arranging things in a sorted manner makes it easier to analyze and search for a particular element among the collection of elements.

For example, In the below example, we are sorting or arranging the elements of an unsorted array in ascending order, i.e., from lowest to highest.

Categories of Sorting in C++

The categories of sorting are:

We know that all the programs are stored inside the hard disk, and whenever we run a program in C++, it comes to the RAM.

There are various types of sorting techniques in C++. We will be learning the most popular ones in this article.

Bubble sort is one of the most straightforward sorting algorithms. In this sorting technique, we begin by comparing the first two elements of the array and checking if the first element is greater than the second element; if it is, we will swap those elements and move forward to the next element.

If the first element is not greater than the second, then we don’t need to swap it. And this process will keep on repeating till the end of the array.

Now let’s have a look at an example of Bubble sort.

As we can see in the above example, we have an unsorted array containing elements

Inside the for loops, there is an if statement which states that if arr[j] is less than arr[i], then swapping will occur, i.e., if the element at index1 is less than the index 0 element, then the swapping will take place. Similarly, one by one, each element will be compared with the next element, and it will proceed till the end.

This is the output.

In selection sorting technique, the smallest element is fetched by comparing itself with the rest of the elements and sorted at the array's first position. The complete array is divided into two halves, the sorted subarray on the left and the unsorted subarray on the right. Once the first element is sorted, the search for the second minimum element begins from the rest of the array and is positioned at second place.

Similarly, all the elements are positioned on the sorted side of the subarray one after the other, and the complete array becomes a sorted array.

Let’s have a look at an example of the Selection sort.

The first for loop will iterate from 0 to num-1. Inside the for loop block, the first element is assigned to this min variable and the element's index to the P variable.

As the index is assigned to P, so we will swap arr[i] with arr[P]. Once swapping is done, we will print the sorted array.

After that, we will compare the third element with all the elements that are before it. Similarly, it goes for the fourth element and so on. Once all the comparisons are made, the elements become sorted.

In this example, we are taking an array as input from the user. After taking the input, a for loop is used, which is iterating from 1 to num-1; the loop starts from 1 because the comparison will start from index 1.

Inside the for loop, the array element is copied to the temp variable, and j is set i-1 because we have to compare the element with its previous element.

j=j-1 is used for decrementing the loop, as per the condition j must be greater than 0.

Then we will put the element at its correct position by assigning temp to the arr[j+1].

The quicksort algorithm is the most widely used algorithm and the most efficient sorting algorithm. It works on the divide and conquer approach, i.e., the array is divided into subarrays, and when these subarrays are sorted, they are combined to form a complete sorted array.

Now let's have a look at an example of Quick sort.

Here, in this example after taking the array as an input from the user, we are passing the array along with its first index 0 and its last index num-1 to the Quick function.

Once it’s done, we will position the partition point by swapping arr[end] with arr[index], and by returning the index, we will return the position of partition or division. Then with the help of d(the point of division), we will call the Quick function recursively to sort the subarrays.

So using all of these techniques, we can perform  sorting in C++.

We can also sort using the C++ library. To use that library function, we must include the #include<algorithm> header file.

The below function compares every element within the range.

The syntax of the function is sort; then, there will be a starting iterator and the ending iterator within the brackets.

After reading this article on sorting in C++, you would have understood What is sorting?, the categories of sorting in C++, and the types of sorting techniques like bubble sort, insertion sort, quick sort etc. You also learned how to sort using the C++ library and also understood the practical aspect of the sorting techniques with the help of examples.

If you are looking to build a career in software development, check the Post-Graduate Program in Full Stack Development by Simplilearn. It can prove to be the ideal solution to help you build your career in the right direction.

Do you have any questions regarding this tutorial on Sorting in C++? If you do, then put them in the comments section. We’ll help you solve your queries. To learn more about Sorting in C++, click on the following link: Sorting in C++