Lesson 23 of 24By Kartik Menon 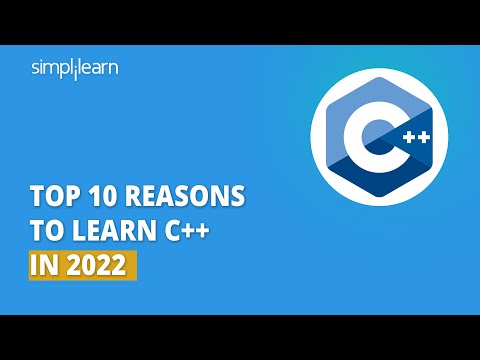 C++ is considered as a foundation language for many languages. It is one of the essential languages that you must know if you are interested in computer science. There is a very high chance that every other programmer or software developer who is doing great in his life is familiar with the concepts and fundamentals of C++. There are many different kinds of jobs out there that require C++ language. It is a versatile language, so it remains in high demand amongst professionals, such as software developers, game developers, C++ analysts and backend developers, etc.

As per the TIOBE index of 2022, C++ lies at 4th position in the world’s most popular language. The career or job opportunities for C++ programmers are enormous because C++ is an old language, and a lot of code is already written in this language.

Now, you will move to another reason to learn C++.

C++ is an Efficient and Fast Language

C++ is an advanced language that supports various programming methods like functional, procedural, and object-oriented programming. It is a fast language; its compile-time and execution time is faster than other programming languages. Some programming languages are also faster than C++. Still, like C++, they are not close to the machine code, as it is an intermediary language, so big organizations rely on C++ for fast speed with lesser resources.

C++ programming language is very well suited for big projects. Many projects, including compilers, cloud storage systems, databases, game development, graphic designs, etc., are built using C++. C++ is also used for making 3D visuals projects, these projects require control over huge amounts of data efficiently, and C++ is one of the best choices for that.

Also, many applications and software that you use or go through in your daily lives are developed in C++. For example, Spotify, the popular music streaming application, has its backend code is written in C++. You all know Youtube, C++ is used in building YouTube video processing function. The Amazon application was also written in C++, however, there are changes over the years and more software like these are developed using C++.

Now you will move to the next reason.

C++ is an old language and is being studied and learned by most of the programmers around the globe, so it has huge community support. The large community of C++ means it will be easier and more flexible to learn this language. Community plays a very important role for a learner. If someone needs any help or guidance regarding C++, many programmers and experts are out there on different platforms creating resources for C++.

Some of the resources are blogs, for example, C++ Tips of the week https://abseil.io/tips/, Podcasts like CppCast CppCast, and organizations like The C++ Alliance, and many more are out there that can guide you through your problem. These resources can help a learner or programmer understand this language and clear the doubts regarding it.

As you understood the community support of C++, it’s time to move on to the next reason.

C++ programming language is almost everywhere around the world. For example, it is used for making browsers, applications, and software. Also, C++ is used majorly to make operating systems, and almost all operating systems are built using C++, for example, Mac Os, Windows, Linux, etc.

Browsers like Safari, Opera, Chrome, Firefox, etc., are written in C++ because it is a fast and efficient language that is why it is preferable. C++ is also preferred for game development and complex business applications. So it is being widely used in different fields requiring high performance, and learning a language like this opens up the doors for your career to different sectors of organizations.

Helps You in Earning Other Programming Languages

C++ is an intermediate-level language; learning this language will give you a much deeper understanding of programming structure. In C++, you have to write, declare, and explain everything in the source code, giving you a deeper knowledge of all the program parts.

Also, the syntax of C, C++, and Java are almost the same, so learning Java and C after C++ will be very easy.

Other languages like Python are much easier to understand because they are almost syntax-free. You don't have to specify everything while writing its code, which makes the programming part easy, but you don't get the opportunity to learn the logic structure of the program like C++. Once you have learned the C++ language, then other languages will be easy for you to learn, as your foundation becomes strong.

An embedded system is a microprocessor-based software and hardware system that is used to design a specific function. Developing these embedded systems requires fast and efficient languages like C++. C++ is widely used in embedded systems because it is an intermediary language. It has both the features of the high-level and low-level language, which gives C++ an edge over other languages because it can directly access the hardware part without sacrificing the high-level part.

As you understood the Embedded systems, move to yet another reason.

C++ is around 40 years old language and is still one of the most popular languages; why is it so? C++ is versatile in nature and is a highly adaptable language. Due to high adaptability, it is still useful when it comes to software and developing games. It is widely used for so long that it is compatible with many languages and is in demand in many sectors. Also, top-tier companies seek employees with a good understanding of C++ programming.

Moving on to the 9th reason to learn C++ programming.

Apart from Python, C++ is also used for simulations. Many simulations are created with the help of the C++ library, which is considered an alternative to the Python language. The object-oriented approach provides faster execution, full accessibility to the base language, portable models and executables, and complementary development tools. The simulation built with tools has the benefits of an object-oriented design, including encapsulation, polymorphism, inheritance, and parameterized typing.

The salary of an entry-level C++ developer is average in the early years because mastering C++ usually takes some time. After 3 to 4 years of experience, the salary package grows at a fast pace, which is a good reason to learn C++ language.

If you are looking to build a career in software development, then you can check the Post-Graduate Program in Full Stack Development by Simplilearn. It can prove to be the perfect solution to help you build your career in the right direction.