Lesson 22 of 24By Kartik Menon 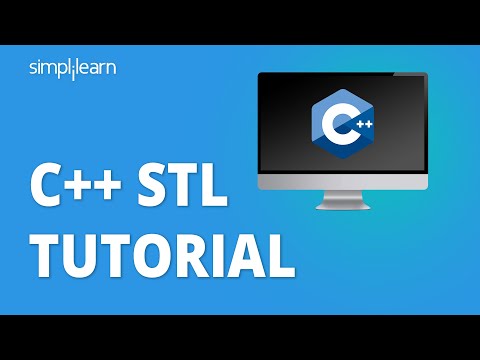 C++ is a general-purpose and flexible programming language; that’s why you need a library to support the C++ language. C++ STL (standard template library) is a software library for the C++ language that provides a collection of templates representing containers, iterators, algorithms, and function objects. In this tutorial, you will learn about C++ STL in detail.

You can define generic programming as an approach that focuses on implementing, designing algorithms and data structures in a particular way such that there is no loss of efficiency. It is a way of developing software that maximizes code reuse without compromising performance. An example of generic programming is STL(standard template library) which is a part of the standard library of C++.

STL stands for Standard Template Library. Alexander Stepanov invented it in 1994, and later it was included in the standard library. The standard library consists of a set of algorithms and data structures that were originally part of the C++ Standard template library.

STL helps in storing and manipulating objects, and it makes the program reusable and robust.

Now, understand the components of STL.

So, start with containers.

If you are dealing with many elements, then you need to use some sort of container. The container can be described as objects that are used to store the collection of data. It helps in recreating and implementing complex data structures efficiently.

After that, you display all the vector elements using a for loop and functions like begin() and end(), pointing to the first element and the last element, respectively.

In the above example, you declare the vector using the initializer list and then declare iterator ptr to the vector.

After that, you declare the vector elements using the iterator functions begin(), and end() functions inside the for loop.

A function object is also known as a functor; it is an object of a class that provides a definition for the operator(). Suppose you have declared an object of some class, then you can use that object just like the function, for example:

After reading this tutorial on C++ STL, you would have understood the Standard template library and generic programming and all the components of STL in C++, like containers, iterators, algorithms, in detail. You also learned about function objects along with some examples.

Do you have any questions regarding this tutorial on C++ STL? If you do, then please put them in the comments section. We’ll help you solve your queries. To learn more about C++ STL, click on the following link: C++ STL