What is Middleware? A Beginner’s Guide 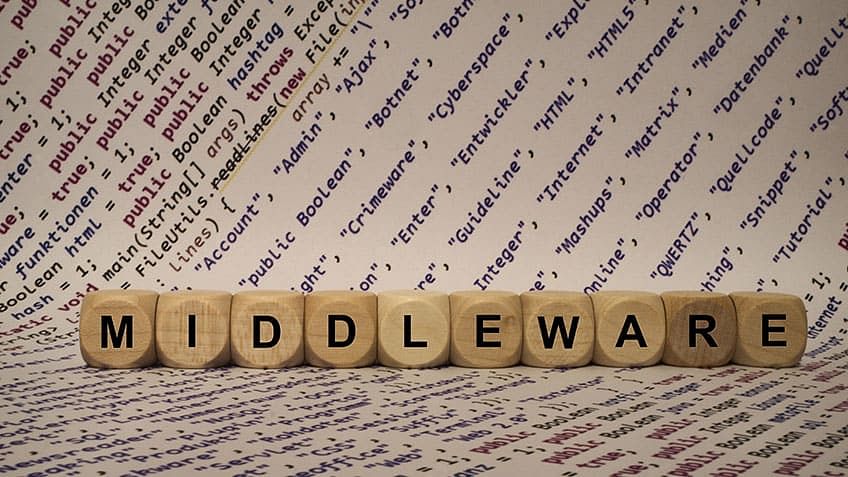 Everyone who owns a computer or other IT-related device knows what software is. Software is what makes computers, smartphones, and tablets function. Software examples include Microsoft Word, Google Chrome, Adobe Photoshop, and Firefox. As you can see, these are popular, well-known software titles.

But have you ever heard of middleware? If not, get ready to have your knowledge base expanded because this article is all about middleware, including what it is, middleware's origin, what kinds of middleware exist, how to choose the best middleware platform, and why it's so crucial for both app development and cloud computing.

In fact, considering how vital cloud computing and app development are today, it's a good idea to familiarize yourself with middleware.

So, let’s get started by answering the question: “what is middleware?”

What Is Middleware? An Overview

Middleware is software that provides a bridge between operating systems and the applications that run on them, behaving as a discreet transition layer. So, middleware acts as the “middleman,” facilitating communication, bridging the gaps between tools, databases, and applications, and ultimately providing unified services to end-users.

Middleware is also known as “plumbing” since it connects two applications so they can pass data back and forth like through a pipeline. It’s especially useful for organizations that employ containerized or multi-cloud environments.

The Origin of Middleware

Although the first reference to middleware was in 1968 in a report following a NATO software engineering conference in Germany, it wasn’t officially introduced until the 1980s as a means of linking legacy systems to modern applications.

There are two broad middleware categories:

Platform middleware, on the other hand, connects varied application architectures. If firms merge or make a third-party acquisition, they may discover that they are using multiple structures. Middleware supports these types of structures and offers three different interconnection arenas:

Middleware transfers the data in all of these arenas from application to application and between databases and files as well.

What Is Middleware: What Kinds of Middleware Are There?

Since there are many different intermediary needs, middleware comes in many forms. Here are ten of the most common middleware types. Note there are at least a dozen classifications.

This middleware infrastructure supports message receiving and sending over distributed applications. It translates and transforms messages between applications and routs them, so they arrive at the correct components and in the proper order. In addition, it simplifies creating apps that cover many different operating systems and network protocols.

This middleware, also known as an object request broker, manages communication between objects.

This middleware lets an application trigger a procedure in another application as if they were both parts of the same application running on the same machine.

This middleware provides tools that developers can use to create, manage, and expose APIs for their applications, allowing other developers to access them.

This kind of middleware simplifies direct access and interaction with back-end databases and usually comes in the form of a SQL database server.

Portal middleware creates interactions between the user’s machine and the back-end services and systems. It offers tools and resources for connectivity and integration from different, yet related, applications.

As the name implies, robotics middleware simplifies the integration process of robotic hardware, software, and firmware among multiple manufacturers and locations.

Embedded middleware acts as a go-between for real-time operating systems and embedded applications.

This middleware lets users abstract specific content without having to consider its source, handled via a simple provide/consume abstraction.

What Is Middleware: How to Choose a Middleware Platform

You may be wondering how middleware succeeds at its role. After all, acting as an intermediary between different platforms and protocols sounds like a tall order! However, middleware accomplishes this by using common messaging frameworks like the simple object access protocol (SOAP), JavaScript object notation (JSON), extensible markup language (XML), , and representational state transfer (REST). Middleware also employs web services that enable different applications and services to communicate. Also, middleware usually provides services that allow components written in multiple languages like C++, Java, PHP, and Python, to communicate with each other.

To sum it up, middleware:

Why Is Middleware Important to Cloud Computing?

Most people agree that the cloud is fantastic. It allows users from disparate architectures and infrastructures to work together, running programs, processing data, and other IT-related functions. However, this type of universal access doesn’t come easy. It’s a complex process, bringing together all these disparate elements.

Fortunately, that’s exactly what middleware was made for. Middleware supports a variety of application environments and manages the complex tasks of cross-platform processing. To put it a different way, middleware and cloud computing are made for each other.

What Role Does Middleware Play in App Development?

Today’s business apps are designed to run on-premises, at scale, and across many cloud platforms. Thus, developers and programmers require an application environment with unified foundational capabilities. In other words, to build multi-platform applications, designers need a “workshop” that has the same characteristics. Middleware is the solution for assembling that kind of environment.

There are four layers of capabilities.

There’s also an additional layer, separate yet part of the overall environment: tooling. Tooling lets teams build applications with preset templates and containers. It also makes it simpler to share code and engage in joint development efficiently. Tooling supports coherent, consistent application development and delivery experience both on-premises and in the cloud.

These five elements combine to form a very effective app development resource, and these days, where app demand is higher than ever, developers need every advantage they can get.

When you consider the number of platforms, operating systems, devices (both new and legacy), cloud environments, and protocols available, it becomes clear that middleware is an essential part of any developer’s toolbox. Middleware is the glue that holds all these disparate elements together.

Are You Interested in Becoming a Full Stack Java Developer?

The IT world is looking for more developers, and full stack developers are especially sought after. Simplilearn offers a Full Stack Java Developer Master’s program that gives you a solid understanding of front-end, middleware, and back-end Java web developer technologies. You will learn to build an end-to-end application, test and deploy code, store data using MongoDB, and much more.

Java full-stack developers in the United States earn a yearly average of $108,394, according to Glassdoor.

So, visit Simplilearn today, and make your dreams of becoming a full stack Java developer a reality.