HomeResourcesCyber SecurityInformation Security Trends to Watch Out for in 2016

Information Security Trends to Watch Out for in 2016 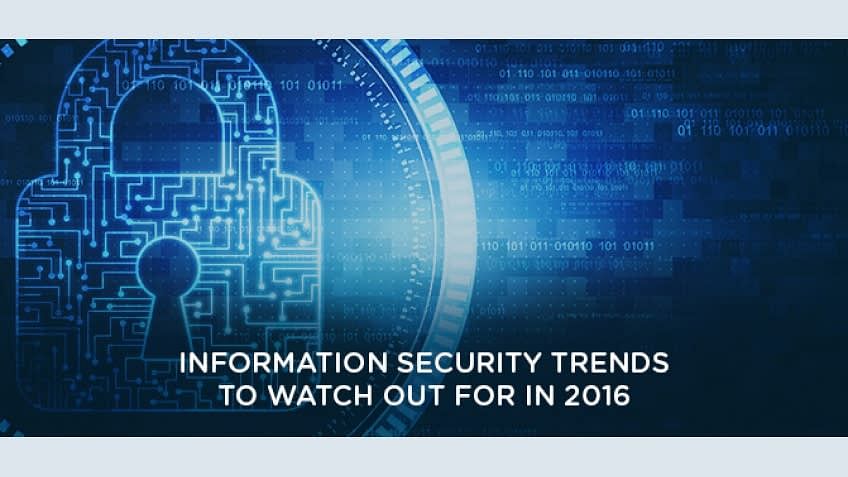 With 2015 coming to an end, anxiety floats around as to what surprises 2016 will hold – especially in the world of IT security!

Security has become a major concern for all domains and industries. Is everything really secure? Or is nothing ever secure? These questions constantly float around board rooms, office bays, discussion rooms, and meetings.

Well, no one knows the answer to that – even we don’t!

However, in this article, we give you a tiny sneak peek into the future, and what 2016 may hold for the world of IT security.

We begin with the most talked about, the most important, and the most hyped – cyber security.

So, what does cyber security have in store? – More security? Or no security developments?

Security measures will be stepped up to meet the digital age:

Every CISO (chief information security officer) will encounter a new headache – digital complexity. With the increasing influence of the digital world, organizations and businesses have changed the way they communicate with each other. With the increase in the use of technology, for communication, more data has been collected, which has led to more points of entry or breach. And due to this immensely rapid pace of development, security has not been able to keep up.

This was seen in the hacking explosion of 2015. To prevent a breach like that again, in 2016, CIOs will have to take a closer and a harder look at security policies, and develop new policies to secure their company data, while addressing this issue urgently. Like any other discipline, information security needs to be re aligned and reevaluated as part of the digital transformation.

The reality, however, from this year onwards, is that no organization, company, or business will be able to avoid security breaches. On the other hand, they must be able to anticipate them and have the capability to identify and respond to them.

The 2016 US Presidential campaigns will be an attractive hacker’s target:

The 2016 US Presidential campaigns are just around the corner. With that said, it is likely that one of the candidates, their campaigns, or their major donor bases may just be hacked.
​


This isn’t something that is new to the world. During the 2008 elections, Republican Vice Presidential Nominee Sarah Palin’s personal email was hacked. These days campaigns are increasingly lost and won online, thus the potential for the potentially motivated hackers to strike has grown tremendously. The political campaigns and the organizations should work towards securing their systems and have an immediate response plan in place.

Hacktivist activities will see a resurgence in 2016, which will be motivated by the cause of reputational damage to a cause or company. Snippets of these are already being seen. The aftermath of the Paris attacks saw ‘Anonymous’ responding aggressively with the declaration of war on ‘ISIS’ and taking a vow to weaken ‘ISIS’ with hacking. ’ Just days later, Reuters reported that Anonymous identified 39,000 pro-ISIS accounts and reported them to Twitter, which supposedly took down 25,000 of those accounts.

The very same way, businesses are not spared from attacks such as these, as happened with the Ashley Maddison case last year. Any organization with a controversial or a polarizing standing must be prepared for the possibility of an attack by hackers for the purpose of harm to its constituency. It is necessary that organizations and businesses prepare their response to an incident of this type and rethink, review their data breach response plans to ensure that all the scenarios are accounted for.

The internet of things:

With the advent of IoT, an increased attack on connected medical devices, connected critical infrastructure, and connected cars have hit the headlines in the recent past – this, is just the tip of the iceberg. The IoT is proving to be a nest egg for hackers around the world.

During the development of networked devices, emphasis is being put on features more than security. In 2016, it is important that ‘security by design’ become the integral issue to deal with while creating networking devices.

The Rest
Apart from cyber security, there are other IT security issues that will become of importance in 2016.

With the shift of security controls from the traditional perimeter to the cloud based providers, the traditional corporate network is becoming more and more irrelevant. In 2016, the adoption of cloud platforms and security as a service will continue.

CIOs are said to move more of their perimeter security controls to these cloud based platforms as part of their efforts to reduce the physical footprints and costs they may leave while using the traditional perimeter.

2016, if anything, is said to be the year of hyper virtualized security. The firewall is something that was always seen as the first and final line of defense for the prevention of threats. However, this can lead to a sense of fake or false security. With workloads being spread out throughout the internet, security professionals will need to invent new strategies for building and securing their critical applications and workloads in a variable security environment.

Enterprises that are making their way into the digital space will be the first to reap its benefits. It is predicted that IT purchasing patterns of business will start to change in 2016, as businesses start to ‘take back’ security into their own hands.

The adoption of formal framework:

The next trend that will be up for 2016 will be the adoption of formal frameworks like the SSE-CMM and NIST. With the use of these frameworks there is a reasonable assurance of a secure application development. Organizations and businesses need to ensure that that software they are building or have already built is secure and does not have loopholes for security exposure. The SSE-CMM is the way to assess this, but it does not go far enough.

A full risk management framework needs to be applied to the firm to augment its other operational risk assessments. The NIST framework, developed in 2014, is becoming the standard for all insurers to assess digital and operational security risks in a structured way and to develop a roadmap to improve their cyber-security practices.

The behavior analysis will see a shift from the emphasis on user credentials to the machine to machine credentials. Anomaly detection and behavioral analytics is said to become less about the analysis of users or the entities and lean more towards leveraging machine learning and data science.

Adding to this, the increasing growth of the micro services and the containerization, will eventually lead to the emphasis on service level credentials and machine learning rather than the human credentials.

IT security moves beyond the classic compliance:

After years and years of checkbox compliance, organizations have begun to turn to and focus their attention to the necessary resources on risk management and information security. Thus, this focuses on the company’s risk and measures, values, and goes way beyond complying with the regulatory requirements. Where and how data is stored is becoming relevant when evaluating any risks. .

In the future, elements such as risk management, business continuity planning and enterprise architecture will be linked even more closely with each other.

The level, sophistication, and complexity of cyber threats occurring today is a challenge for many of the IT security teams around the world.

In 2016, the demand for MSS will continue to grow for the purpose of dealing with technological and personnel bottlenecks. With the MSS, need based support for timely problem solving and the usage of innovative technologies is allowed.

As part of Industry 4.0 with Machine to Machine (M2M) communication, increasing networking and an increasing “softening” of the perimeter security, companies must close open attack vectors, and learn to understand how office IT and networked production IT should work together in the defense against attacks.

So we have given you all we know. Now it is your turn. Take a stand against evil this Christmas! Roll up your sleeves and get ready for the future!!

With high quality content and trainers worldwide, Simplilearn offers courses in IT security management for those wishing to kick start their careers.

Take a sneak peek into one of our world renowned courses, here:
​

Avantika holds a degree in Journalism, & writes on such topics of interest as PMP, Digital Marketing, Six Sigma, & Big Data.