HomeResourcesSoftware DevelopmentBlockchain Tutorial for Beginners to Advanced LevelWhat Is Dao?: A Brief Introduction To A New Era Of Technology

What Is Dao?: A Brief Introduction To A New Era Of Technology

Lesson 32 of 33By Simplilearn 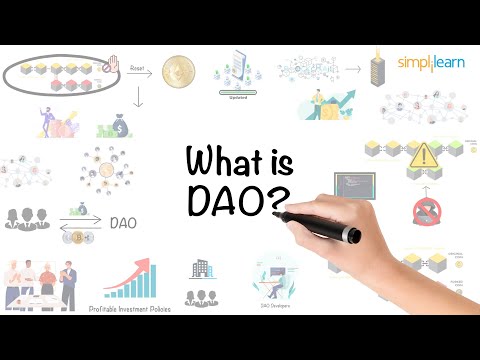 The DAO is a big deal in the crypto world right now because it's the future of job contracts, housing leases, business deals, and maybe even your career.

So, In this tutorial, you will further grasp what DAO is and how it's more than just a Blockchain-based organization. This tutorial will help you understand ‘what DAO is’ and how it works with Smart Contracts and Dapps. Also, it gives you a glimpse of the history of the infamous DAO Attack.

What Is the DAO?

History of the DAO

Comparison Between the DAO and a Traditional Organization

How Does it Work?

It's vital to note that these tokens are not equity shares; rather, they're contributions that grant people voting rights but not ownership. A DAO is often not owned by anyone and is simply software that runs on the Ethereum network.

DAO membership is organized in several ways. The membership can influence the voting system and other critical aspects of the DAO.

By May 2016, the DAO had collected a significant portion of all ether tokens ever released (up to 14%, according to reporting by The Economist).

Future of the DAO

The DAO breach and related Ethereum hard fork shook the Ethereum community and raised serious concerns about the developing platform.

In hindsight, Vitalik Buterin, Ethereum developers, and the global community made decisions that ensured the Ethereum Blockchain's survival in its early days. Since the DAO attack, Ethereum has increased in importance as a foundation of Blockchain, cryptocurrency, and decentralized finance. And this occurrence heralds the start of a new age for Ethereum's public Blockchain.

In this tutorial, you saw ‘what is DAO’, its concepts, how DAO works, and what future it holds for itself. You also came across DAO's importance as a crucial part of the crypto market and how it's different from traditional organizations. Whether you're an aspiring enthusiast to break into this exciting industry, an experienced Blockchain developer, or just to know more about Blockchain and its underlying concepts like DAO, Defi, or smart Contracts, enrolling in Simplilearn's Blockchain Certification Training program will help you with all levels of experience to explore, understand and learn more about, Blockchain, cryptocurrency, and its technology.

Do you have any questions for us? Please feel free to drop them in the comments section of this tutorial; our experts will get back to you as soon as possible.