Lesson 12 of 16By Simplilearn 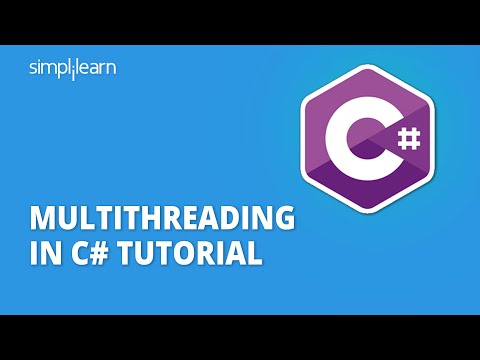 Multitasking refers to the act of performing several tasks or activities at the same time. As an example of multitasking, the Windows operating system may run many applications concurrently, such as Google Chrome, Notepad, and MS Office. The operating system employs the concept of a process to run all of these programs simultaneously.

In this 'C# Threads' tutorial, you will learn the major technical aspects of Thread class and the fundamentals involving Multithreading.

What Is a C# Threads Class?

The term "thread" refers to a program's execution path. The control flow of each thread is unique. Threading decreases the number of wasted CPU cycles and enhances the overall performance of a program. New threads are created with the help of the thread class.

The thread class is used to specify a thread's priority. The current status of a thread is also displayed.

You can now go on to the next chapter to learn about the Thread Life-Cycle now that you have a basic knowledge of the definition of C# Threads.

Generally, a thread's life cycle starts with the instantiation of an object of the "System.Threading" Thread class ends whenever the thread is suspended or completes its processing.

There are four states of a Thread Life-Cycle, they are as follows:

It happens when a thread object is created, but the Start method is not called.

The Ready state indicates that the thread is ready for implementation but is waiting for a CPU loop.

This is when you have a "not runnable state" and a thread is not executable because of the following:

It is the state wherein the thread's implementation has finished or has been stopped.

What Is a Single-Threaded Model?

The Main Thread is the primary thread in any program that executes the logic of the program. As a result, by nature, all programs and applications are single-threaded. This single-threaded design has a drawback. The single thread synchronizes the execution of the program's processes, meaning that each one is completed sequentially. Because of the delay in processing the first step, the subsequent process is slower.

Now, open the visual studio code and write a code to demonstrate the single-threaded model.

// When the value of t is equal to

// 5 then this method sleeps for

// it resumes its working

Now, go ahead and run it.

Now it went to sleep for 5 seconds after t=5.

What Is a Multi-Threaded Model?

Now, it’s time to open your visual studio code and write a code to demonstrate the single-threaded model.

// C# program to illustrate the

// this method sleeps for 5 seconds

By now, you must have a good knowledge and command of the technical aspects of C# Threads and multithreading.

The next lesson in your C# training can be "Operators and Expressions in C#". There are a variety of symbols that are used to do a variety of functions, including operators. Variables and values are nothing new to operators. The combination of operands and operators makes up an expression in C#. At the very least, an expression requires an operand; nonetheless, it can have no operators.

Simplilearn is the world's most popular online Bootcamp for learning digital economy skills, and it's here to help you do that. Digital marketing and data science are just a few subjects you will cover in-depth in the online courses.

You've come to the right place if you're interested in learning more about software development and working in the field. The Caltech CTME and the Indian Institute of Technology, Kanpur, have collaborated with Simplilearn to deliver their Software Development courses. In addition to more advanced topics like Competitive Programming, these courses teach the fundamentals of data structures and algorithms. As a software developer, data structures, including trees, graphs, and queues, will be taught to you.

The comments section below is open for questions and comments about this 'C# Threads' tutorial. Happy learning!