Lesson 5 of 21By Kartik Menon 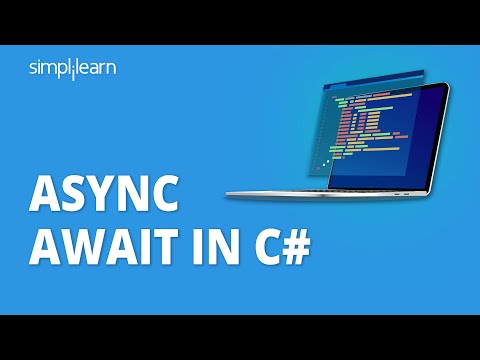 Now, go ahead and begin learning C# async await through the following docket below.

Asynchronous programming allows you to divide your logic into available tasks, which allow you to perform long-running operations such as reading a large file, making an API call, downloading a resource from the web, or performing a complex calculation without blocking the execution of your application on the UI or service.

As a result, you can call an async method independently by passing it a task object, then do some unrelated work, and then await that task to see if it has already finished. In which case it will return the value from the task and then use it in subsequent statements, or if it has not yet finished, in which case the execution will return to the caller of the async procedure. The program will normally execute without blocking the UI or the running service, once the task is done.

It is recommended to use the Task-based Asynchronous Pattern whenever you want to have an asynchronous implementation in your application. On top of that, you can use the async/await feature to enhance the structure of your application further, making your code more organized and well-maintained.

You can incorporate the benefits of asynchronous programming into your project with a few minor changes to your code.

The following are the primary advantages of asynchronous programming with async/await:

In this C# async await tutorial, you will learn why we should write asynchronous code.

The responsiveness or running state of your application's UI or service should not be blocked or affected in either scenario.

For each async method, .Net framework will create a state for each of the async methods. Net framework will produce a state machine to keep track of the calls and what should be done once the current Task has been completed. Check out this in-depth article on async/await compilation and state machines. Also, read Async in Depth to learn more about Async and what happens behind the scenes of Task and TaskT>.

Moving forwards on this C# async await tutorial, you will look at the structure of async-await in C#.

The following changes should be made to a normal method to make it asynchronous and use the async/await keywords:

The keyword async should be included in the method definition; this keyword does nothing except allow you to use the keyword await in the procedure.

It is important to note that, while returning void in an async method is permitted, it should not be used in most cases because the other two return types, Task and TaskT>, represent void and T after the available method completes and returns the result. As a result, void as a return type should only be restricted to event handlers.

In the following section of this C# async await tutorial, you will look at input-output bound code async and await in C#.

Following that, you will see CPU-bound async await code in C#.

Finally, in this C# Async await tutorial, you will get a look at the summary of everything you have learned so far.

If you want a complete study that goes beyond Mobile and Software Development, Simplilearn's Full Stack Web Developer program will be ideal for you. This online coding Bootcamp, delivered in collaboration with Caltech CTME, covers the most in-demand programming languages and skills required for success in software development today. It's time to go out and explore.

Do you have any queries about this tutorial on the C# Async Await? Please place them in the comments section at the bottom of this page. Our experts will be glad to reply to your questions as earliest as possible!