The Ultimate Guide To A One-Stop Solution To C# Interface

Lesson 3 of 16By Kartik Menon 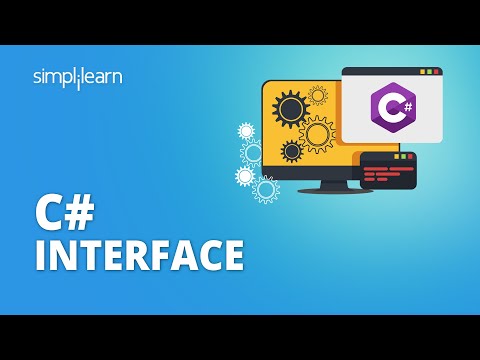 The word interface describes an abstract type that holds no data but defines behaviors as method signatures in various object-oriented languages, particularly those lacking multiple inheritances. A class that declares that it implements a C# interface is said to have code and data for all the C# interface's functions.

What Is a C# Interface?

Interface in C# is a blueprint of a class. It is like an abstract class because all the methods declared inside the interface are abstract methods. It cannot have a method body and cannot be instantiated.

You declare an interface with a capital letter I in front of the name.

After understanding what C# Interface is, you will explore the need for Interfaces.

Why Do You Need C# Interface?

Since you cannot use inheritance with classes in C#, to overcome this limitation, you must employ interfaces. Interfaces are used to build the loosely-coupled applications, which means that components are not dependent on each other, and any altercation will not impact the application itself.

Let's say, for example, there are two classes: drawable and shape. Now, this drawable class depends on the shape class since it can only draw shapes if said shape is defined in the class. This dependency is due to them being tightly coupled.

Now let's say you have an interface drawable. Now this interface can easily communicate with different classes, and it will not affect the main goal to draw the shape. Because now dependency is loosely coupled.

And this is all for the C# Interface tutorial, and now this write-up will discuss the next steps to understand C# Programming.

"C# Web API" can be your next concept to learn. The Web API framework is a powerful tool for creating HTTP-enabled service APIs that expose data and services. It may be viewed via browsers, mobile devices, desktop computers, and tablets, among other clients. Because it is an HTTP service, it may reach a large number of users.

If you want a more extensive study that extends beyond Mobile and Software Development, Simplilearn's Full-Stack Development course will be suitable. Caltech CTME's online coding Bootcamp covers the most in-demand programming languages and abilities needed for today's software development success. It's time to embark on an adventure.

Do you have any questions about this C# Interface tutorial? Please mention them in the comments section at the base of this page. Our experts will be glad to reply to your questions as early as possible!