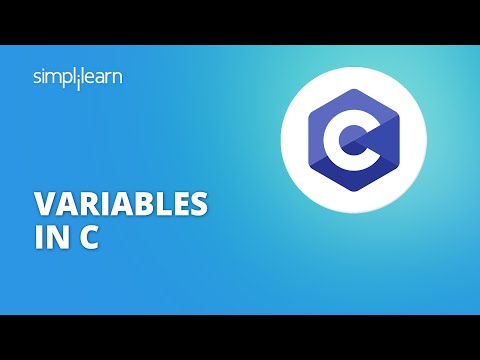 Naming has been a vital part of technology and anything that revolves around it. Similarly, programming a solution to a technical problem also involves naming. Should you ask how? That's where you must come across variables and data types.

In this tutorial about variables in c programming, you will learn about the naming conventions followed and how exactly the variables in C operate in real-time.

What Are Variables in C?

In C programming language, a variable is a user-defined or a user-readable custom name assigned to a memory location. Variables hold a value that can be modified and reused many times during the program execution.

A variable can be an alphabet or digits and start with an underscore, but you cannot declare a keyword as a variable name.

Now that you have understood the fundamental definition of the Variables in C, go through the declaration part.

Declaration of Variables in C

The following syntax is strictly followed to declare any variable in C:

So far, you understood the declaration phenomenon. Now, take a step ahead and learn how to initialize variables in C once they are declared.

Initialization of Variables in C

The following will explain the process in an elaborate yet simple manner.

You may also declare and initialize multiple variables at the same time as given below:

You have come across the technical definition, declaration, and initialization of Variables in C. Now, you have an important stage. There are rules and regulations to declare and initialize the variables in C.

Now, you will go through the rules and regulations to have a smoother learning experience.

Rules for Naming Variables in C

Rules and Regulations will always make things simpler and eliminates chaos to a greater extent. Similarly, in C Programming, there are rules for Naming Variables in C, as mentioned below.

Errors for all the invalid variables declaration are shown in the below image.

Now that you have understood the rules and regulations and all the technicalities revolving around the Variables in C, the only thing left out will be the types of variables in C. You will learn them in detail with proper technical definitions and examples as follows.

Types of Variables in C

C language helps you with providing a wide range of variable varieties for different programming purposes, as described below.

You will go through each of them in detail.

Followed by Local variables, you will learn all about the Global variables.

After Global variables, you have Static variables.

Variables declared with a keyword static are static variables, whose lifetime is throughout the program run time.

Followed by static variables, you have external variables.

In File 1(demo. c): access external variables x and y to perform addition operations by including the header file(demo. h).

To access the same external variables x and y in the second file (demo1.c) to perform subtraction operation, you include the header file (demo. h).

Up next, you have Automatic variables as the last variety.

"Data Structures in C" can be your next topic. So far, you have learned the variables in C programming Language. The next fundamentals will be the data structures and the varieties in data structures used for different purposes.

If you are interested in building a career in software development, then feel free to explore Simplilearn's Courses that will give you the work-ready software development training you need to succeed today. Are you perhaps looking for a more comprehensive training program in the most in-demand software development skills, tools, and languages today? If yes, our Post Graduate Program in Full Stack Development should be just the right thing for your career. Explore the course and enroll soon.

If you have any questions regarding the "variables in C” tutorial, please let us know in the comment section below. Our experts will get back to you ASAP.

Hoor is a Bangalore-based Research Analyst. She has a knack for learning computer languages and technologies. In her free time, she enjoys dancing and singing.