Your One-Stop Solution To Trees in C# 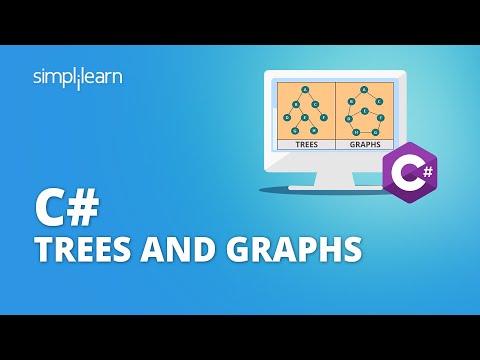 C#, a new widely-used programming language, was developed to meet the rising needs of new workloads and paradigm shifts in the programming community. When comparing a Tree to other data structures, like an array or a LinkedList, you don't have to state the tree's size, making it more efficient. Linked lists require large O(n) operations for insertion, deletion, and searching, while Trees do not.

What Are Trees in C#?

Data representation characterizes a hierarchical structure in the form of a tree. Every node in a tree comprises two distinct components (Data and References). The top node of the tree is referred to as the Root node, and the two products that fall beneath it are referred to as the "Left Subtree" and the "Right Subtree."

You can now go on to the next topic to learn about the types of trees now that you have a basic knowledge of the definition of Trees in C#.

What Are the Types of Trees in C#?

There are five types of Trees in C#:

When there is no restriction on the hierarchy of the tree, it is known as a general Tree. Children of a Node in the General Tree are unlimited; all other trees are subsets to this one.

A Binary tree is a type of tree where each parent can only have two children. The children are called left or right children and are one of the most utilized trees.

An AVL Tree is an extension of a Binary search tree that can self-balance itself. Each node in an AVL tree is assigned a balancing factor used to determine whether a tree is balanced. A balance factor is a difference between the heights of the left subtree with the right subtree. In a perfect world, a balance factor can only be either 1, 0, or -1.

Another type of self-balancing tree is a red-black tree. In a red-black tree, each node has an extra bit. This extra bit is often considered the node's color (red or black). These colors are used to ensure that the tree stays balanced when new things are added and removed. Even though the balance of the tree isn't perfect, it's good enough to cut the time it takes to search and keep it around O(log n) time, where n is the number of elements in the tree.

So far, you have learned about the types of trees. Now you will explore the basic operations of trees in C#.

Some Basic Operations on Trees in C#

There are three basic operations you can perform on a Tree.

You can perform insertion on a tree in various ways. It depends on where you want to insert the new element.

When it comes to deleting a node, it can get tricky when you need to decide what to do with its left and right children.

When searching for an element, you have to determine whether the current node matches the given value, or if you have to recur to the left and right sub-tree, repeating the same process.

Now, look at some of the terminologies related to Trees.

Some Terminology Related to Trees in C#

Tree Traversal in Trees in C#

Now that you have looked at various operations and traversal on trees in C#. implement them in a code editor.

Implementation of Trees in C#

You will be implementing the Trees in C# with the help of a code editor.

Node before = null, after = this.Root;

//Is new node in left tree?

//Is new node in right tree?

// if the value is the same as the parent's value, then this node is to be deleted

// the node with one or no child

// node with two children: Get the inorder successor (smallest in the right subtree)

Applications of Trees in C#

By now, you have a good grip on the technical aspects of Trees in C#.

The next lesson in your C# training can be "Graphs in C#." There are nodes and edges in a graph, which is a data structure that isn't straight. If you look at a graph, you can see lines or arcs that connect any two points in the graph. These points are called "nodes."

Simplilearn is the world's most popular online boot camp for learning digital economy skills, and it's here to help you do just that. Digital marketing and data science are just a few subjects we cover in-depth in our online courses.

The Caltech CTME and the Indian Institute of Technology, Kanpur, collaborated with Simplilearn to deliver their Software Development courses. In addition to more advanced topics like Competitive Programming, these courses teach the fundamentals of data structures and algorithms. Data structures including trees, graphs, and queues will be taught as a software developer.

The comments section below is open for questions and comments about this 'Trees in C#' tutorial. Happy learning!