Lesson 21 of 21By Simplilearn 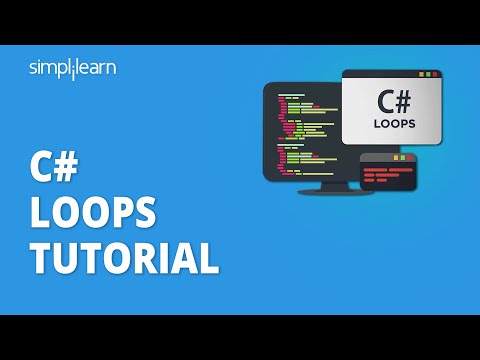 At times finding a solution to a problem might seem recursive and a traditional coding approach to repeatedly execute a logic might drastically increase the code length. This can be resolved by implementing loops. Loops are conditional statements that can execute logic for any number of times and also minimize the code to a major extent.

In this tutorial, you will learn about many forms of loops in C#, which include while, do-while, for each, nested loops, continue, break, and switch, with syntax and code examples.

Introduction to Loops in C#

The repeated execution of a sequence of operations is common in programming. A loop is a basic programming element that allows you to repeat the execution of a piece of code. The loop's code is repeated a certain number of times or until it achieves a certain time, depending on the loop's kind. The situation is in order (exists).

After understanding loops in C#, you will look at a few different sorts of loops in further depth.

Types of Loops in C#

Loops are used to repeat one or more statements until a condition is met. The types of loops in C# are as follows:

While the condition is any expression that yields a Boolean result–true or false–it is known as the loop condition because it defines how long the loop body will be repeated. The programming code performed at each loop iteration, i.e., anytime the input condition is true, is referred to as the loop body in this example.

While the while loop checks the condition after each loop body execution, the do-while loop does not. A loop with a condition at the end is referred to as this loop-type (post-test loop).

While the functionality of a for loop is like that of a while loop, the syntax is different. When loop statements are to be executed are known ahead of time, for loops are preferred. The loop variable initialization, condition to be tested, and increment/decrement of the loop variable are all done in one line in the for loop, resulting in a shorter, easier to debug looping structure.

Testing Condition: The circumstances in which loop statements are run. It's used to ensure that the loop's exit condition is correct. Either true or false must be returned. The control is withdrawn from the loop and stopped when the condition is false.

Increment / Decrement: The control returns to the testing condition after incrementing or decrementing the loop variable dependent on the requirement.

Nested loops are programming constructs made up of several nested loops within each other. You execute the innermost loop more frequently, while the outermost is executed less frequently.

If there is a continue statement when the loop starts, it will stop the current iteration and control the next iteration by returning to the loop's start.

The Switch statement in C# is a multiway branch statement. It provides an efficient method for transferring execution to different parts of a code based on the expression's value. The switch expression is an integer type, int, char, byte, short, enumeration, or string type. The expression is checked for various causes, and only the one that matches is executed.

Now that you’ve completed the loops in the C# tutorial, summarize what you’ve learned so far.

In this loops in C# tutorial, you looked at everything there is to know about loops in C#, including all the different types of loops, including while, do-while, for each, and many more, with introductions and syntax, as well as flow diagrams and descriptions. Finally, you saw all of these loops with code examples for a better learning experience.

Do you have any comments or queries about this Loops in C# tutorial? Please leave them in the comments section at the bottom of this page if you do. Our experts will gladly respond to your questions as soon as possible!