Lesson 32 of 33By Nikita Duggal 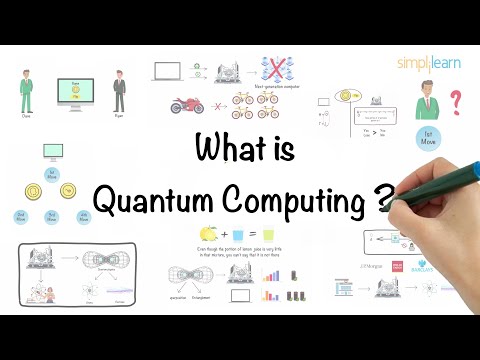 Quantum computing is a new technology that employs quantum physics to solve problems that standard computers are unable to answer. Today, many firms attempt to make genuine quantum hardware available to thousands of developers, a tool that scientists only began to conceive three decades ago. As a result, our engineers deploy ever-more-powerful superconducting quantum processors regularly, bringing us closer to the quantum computing speed and capacity required to revolutionize the world.

But that isn't enough; there are still a lot of issues to be answered, such as how quantum computers function and how they vary from ordinary computers, as well as how they will impact our world. You've come to the right place.

In this tutorial, we will explore every bit of quantum computing and understand its concepts to get our answers.

What Is Quantum Computing?

How Do Quantum Computers Work?

Quantum computers are more elegant than supercomputers, as they are smaller and use less energy. Multidimensional quantum algorithms are run on them using qubits (CUE-bits).

The Quantum Hardware system is quite large and mostly comprises cooling systems to keep the superconducting processor at its ultra-cold operational temperature.

A desktop computer probably has a fan to keep cool enough to work, whereas Quantum processors must be extremely cold, only a hundredth of a degree above absolute zero. And this is done by making superconductors out of supercooled superfluids.

Certain materials in the processors exhibit another significant quantum mechanical feature at those ultra-low temperatures: electrons pass through them without resistance. This makes them "superconductors." When electrons flow through superconductors, they generate "Cooper pairs," which match up pairs of electrons. Quantum tunneling is a mechanism that allows these couples to transfer a charge over barriers or insulators. A Josephson junction is formed by two superconductors arranged on opposite sides of an insulator.

The superconducting qubits in Quantum Computers are Josephson junctions. We can regulate the behavior of these qubits and get them to hold, modify, and read individual units of quantum information by firing microwave photons at them.

A qubit isn't particularly enough on its own. It can, however, perform a critical task: superpositioning the quantum information it carries, which represents a combination of all possible qubit configurations.

Complex, multidimensional computing landscapes can be created by groups of qubits in superposition. In these settings, complex problems can be expressed in unusual ways.

Entanglement is a quantum mechanical phenomenon in which the behavior of two independent objects is linked. Changes to one qubit directly impact the other when two qubits are entangled. Quantum algorithms take advantage of these connections to solve difficult issues.

Different approaches and solutions are being taken to address this problem, such as using more resilient quantum processes or finding better techniques to detect faults.

Why Do We Need Quantum Computers?

And here comes Quantum Computers, which are designed to handle more complex problems much easier and faster than any other classic computer or supercomputer.

While several businesses have created personal quantum computers (albeit at a high cost), there is yet nothing commercially available. JPMorgan Chase and Visa are both investigating quantum computing and related technology. Google may offer a cloud-based quantum computing service after it has been built.

Quantum technology can also be accessed without developing a quantum computer. By 2023, IBM hopes to have a 1,000-qubit quantum computer operational. For the time being, IBM only enables access to machines that are part of its Quantum Network. Research organizations, universities, and laboratories are among the network members.

Quantum technology is also available through Microsoft's Azure Quantum platform. Google, on the other hand, does not sell access to its quantum computers.

Do you have any Questions for us? Please Mention it in the comment section of the "Quantum Computing" article and we'll have our experts answer it for you.