Fundamentals Of Arithmetic And Geometric Progression

Lesson 11 of 24By Avijeet Biswal 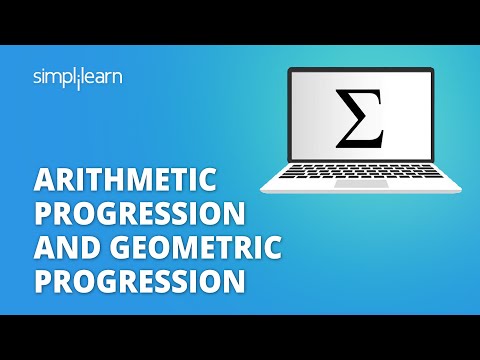 In mathematics, a sequence is a list of objects (or events) that have been ordered sequentially, such that each member either comes before or after every other member. A series is a sum of a sequence of terms. That is, a series is a list of numbers with addition operations between them. This tutorial will teach you about Arithmetic and Geometric Progression, a part of sequence and series.

Sequence and series are important topics of mathematics. Several topics come under sequence and series. In this tutorial, you will learn in detail about Arithmetic and Geometric Progression.

What Is an Arithmetic Progression (A.P.)?

A sequence is called an arithmetic progression if the difference between a term and the previous term is always the same.

The constant difference, generally denoted by d, is called the common difference.

The following example will illustrate the procedure:

Example: Show that the sequence <an> defined by an = 4n + 5 is an A.P. Also, find its common difference.

Clearly, an+1 - an is independent of n and is equal to 4. So, the given sequence is an A.P. with a common difference of 4.

General Term of an Arithmetic Progression

Let “a” be the first term and “d” be the common difference of an A.P. Then, its nth term is given by:

Solution: Clearly, the given sequence is an A.P. with first term = 72 and

The sum (Sn) of n terms of an A.P. with the first term ‘a’ and common difference ‘d’ is

Solution: Let a be the first term and d be the common difference of the given A.P.

A sequence of non-zero numbers is called a geometric progression (abbreviated as G.P.). If the ratio of a term and the term preceding it is always a constant quantity.

The constant ratio is called the common ratio of the G.P.

General Term of a Geometric Progression

The nth term of a G.P. with first term a and common ratio r is given by

Solution: The given progression is clearly a G.P. with first term a = 2 and common ratio = 3.

The sum of n terms of a G.P. with first term ‘a’ and common ratio ‘r’ is given by

With this, you have come to an end of this Arithmetic and Geometric Progression tutorial. You have learned how to calculate the nth term of any series and also the sum of the n terms in any given series.

Arithmetic and Geometric progressions are statistical fundamentals that are essential to working in Data Analytics. Learn all the essential concepts and perfect your skills in our Purdue University partnered Data Analytics Certification Program. Delivered in collaboration with IBM, you learn a curriculum with hand-picked skills that train you to become a world-class data analytics professional fast.

Have any questions for us related to Arithmetic and Geometric progressions? Please leave them in the comments section of this tutorial. Our experts will get back to you on the same ASAP!