Lesson 15 of 24By Kartik Menon 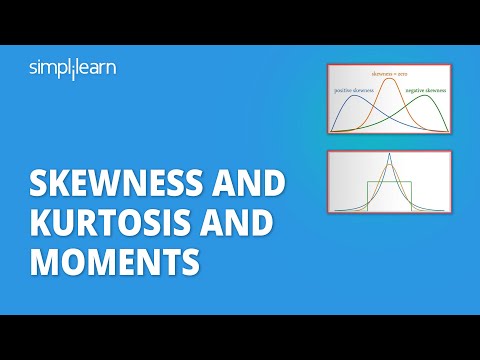 In today's world, data is becoming increasingly important. Entire professions are dedicated to studying, understanding, manipulating, and processing data. It is important to hence, know about different types of data and their associated properties.

The most frequently occurring type of data and probability distribution is the normal distribution. A symmetrical bell-shaped curve defines it. However, under the influence of significant causes, the normal distribution too can get distorted. This distortion can be calculated using skewness and kurtosis. In this tutorial titled ‘The Simplified and Complete Guide to Skewness and Kurtosis’, you will be exploring some of the different types of distortion that can occur in a normal curve.

Become a Data Science Expert & Get Your Dream Job

What Is a Normal Distribution?

A normal distribution is a continuous probability distribution for a random variable. A random variable is a variable whose value depends on the outcome of a random event. For example, flipping a coin will give you either heads or tails at random. You cannot determine with absolute certainty if the following outcome is a head or a tail.

When the continuous probability distribution curve is bell-shaped, i.e., it looks like a hill with a well-defined peak, it is said to be a normal distribution. The peak of the curve is at the mean, and the data is symmetrically distributed on either side of it. The mean, median, and mode are equal to each other or lie close to each other.

Measures of Skewness and Kurtosis

Skewness is used to measure the level of asymmetry in our graph. It is the measure of asymmetry that occurs when our data deviates from the norm.

Sometimes, the normal distribution tends to tilt more on one side. This is because the probability of data being more or less than the mean is higher and hence makes the distribution asymmetrical. This also means that the data is not equally distributed. The skewness can be on two types:

The median is always the middle value, and the mean and mode are the extremes, so you can derive a formula to capture the horizontal distance between mean and mode.

The above formula gives you Pearson's first coefficient. Division by the standard deviation will help you scale down the difference between mode and mean. This will scale down their values in a range of -1 to 1. Now understand the below relationship between mode, mean and median.

If this value is between:

Your Data Science Career is Just 6 Months Away!

Kurtosis is used to find the presence of outliers in our data. It gives us the total degree of outliers present.

Hence, you can say that Skewness and Kurtosis are used to describe the spread and height of your normal distribution. Skewness is used to denote the horizontal pull on the data. It tells you how spread out the data is, and Kurtosis is used to find the vertical pull or the peak's height.

Statistical concepts like Skewness and Kurtosis are critical concepts applied in the field of Data Analytics. If you are looking to pursue this line of study further and perhaps make a career as a Data Analyst, Simplilearn’s Data Analytics Certification Program in partnership with Purdue University & in collaboration with IBM is the program for you. Learn from experts in the field, attend masterclasses from Purdue and IBM and get certificates and endorsements that can help you get into today’s top companies in exciting Data Analytics roles.

Was this tutorial on Skewness and Kurtosis useful to you? Do you have any doubts or questions for us? Mention them in this article's comments section, and we'll have our experts answer them for you at the earliest!