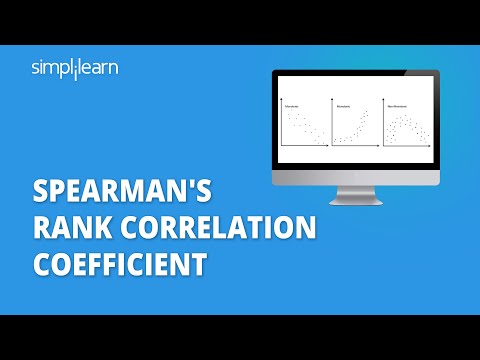 What Is Monotonic Function?

The formula for Spearman’s rank coefficient is:

di = Difference between the two ranks of each observation

The Spearman Rank Correlation can take a value from +1 to -1 where,

Let’s understand the concept better with the help of an example.

Consider the score of 5 students in Maths and Science that are mentioned in the table.

Step 1: Create a table for the given data.

Step 3: Calculate the difference between the ranks (d) and the square value of d.

Step 5: Insert these values into the formula.

The Spearman’s Rank Correlation for the given data is 0.3. The value is near 0, which means that there is a weak correlation between the two ranks.

If you are looking to pursue a career as a Data Analyst, Simplilearn’s Data Analytics Certification Program in partnership with Purdue University & in collaboration with IBM is the program for you.

Was this tutorial on Spearman’s Rank Correlation useful to you? Do you have any doubts or questions for us? Mention them in this article's comments section, and we'll have our experts answer them for you at the earliest!