What Is Correlation? A Guide for Beginners 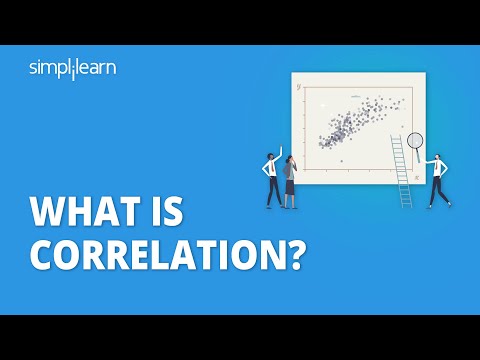 Correlation refers to the statistical relationship between the two entities. It measures the extent to which two variables are linearly related. For example, the height and weight of a person are related, and taller people tend to be heavier than shorter people.

You can apply correlation to a variety of data sets. In some cases, you may be able to predict how things will relate, while in others, the relation will come as a complete surprise. It's important to remember that just because something is correlated doesn't mean it's causal.

There are three types of correlation:

What is Correlation Coefficient?

There are mainly two types of correlation coefficients.

The Pearson correlation coefficient is defined in statistics as the measurement of the strength of the relationship between two variables and their association. It is denoted by r.

The correlation coefficient can be calculated by using the below formula:

di= Difference between the ranks of corresponding variables

You will now see how you can calculate the correlation between two variables using Excel. Here, you have the data of the temperature of the day and the unit of ice cream sold on that day.

Step 1: On the Data tab, in the Analysis group, click Data Analysis.

Step 4: Click OK. You will get the correlation data.

0.774 shows there is a strong positive correlation between the two variables.

Nc is the number of concordant.

Nd is the number of discordant

Spearman's rho correlation values are often larger than Kendall's Tau values. Concordant and discordant pairings are used as the basis for the computations. Now, let’s see how to find correlation coefficient?

Before going through the steps, let’s see what does correlation mean in statistics? The size and direction of a relationship between two or more variables are described by the statistical measure of correlation, which is expressed as a number. However, a correlation between two variables does not necessarily imply that a change in one variable is the reason for a change in the values of the other. Let’s calculate correlation coefficient.

Decide on your variables before you start your math. You may include these numbers in your equation after you are familiar with your data sets. Put the x and y variables between these values.

Calculate the Mean of the X and Y Variables

Multiply and Find The Sum

This is the next phase. Each a-value must be multiplied by the matching b-value. Once you've performed all of the multiplications with their respective terms, get the total, which will be the numerator of the formula.

At this stage, you may square each a-value and calculate the total. After that, compute the square root of the amount you just established. This will serve as the denominator of the formula.

1. Correlation does not indicate causality and cannot be used to do so. We cannot infer that one variable is the cause of another even though there is a very high relationship between them.

Imagine, for instance, that there is a link between viewing violent TV shows and engaging in violent conduct as a teenager. It's possible that a third (extraneous) variable, like growing up in a violent household, is what causes both of these, and that both violent behavior and TV watching are the results of this.

2. We are limited by correlation to the information that is provided. For instance, suppose research revealed a link between the amount of time students spend on their homework (from half an hour to three hours) and the number of G.C.S.E. passes (1 to 6). It would be incorrect to conclude from this that putting in 6 hours of homework would probably result in 12 G.C.S.E. passes.

An individual's body fat tends to be lower the more time they spend jogging. In other words, there is a negative correlation between the variable body fat and the variable running time. Body fat decreases as running time increases.

Exam results typically suffer when a student watches more television. In other words, there is a negative correlation between the variable amount of time spent watching TV and the variable exam grade. Exam results decline as TV viewing time increases.

The relationship between a person's weight and height is often good. To put it another way, bigger people often weigh more.

If you are looking to pursue this further and make a career as a Data Analyst, Simplilearn’s Data Analytics PGP in partnership with Purdue University & in collaboration with IBM is the program for you.

Was this tutorial on what correlation is helpful to you? If you have any doubts or questions, please mention them in this tutorial’s comments section, and we'll have our experts answer them for you at the earliest!