What Is Normal Distribution & Standard Deviation in Statistics 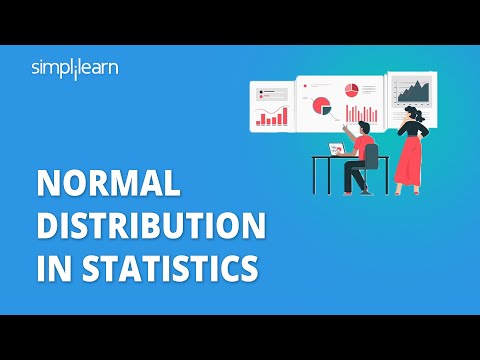 The data you want to analyze can have any distribution and the probability distribution graphs can take on very distinct and recognizable shapes. Recognizing these graphs and distributions can help you find certain characteristics of your data and perform specific calculations on them.

What is Normal Distribution?

In this definition of a normal distribution, you will explore the following terms:

From the above graph, you can see that the distribution is mostly about the mean or the average of all heights. Apart from this, most data is around the mean. As you move away, the probability density decreases too. This kind of curve is called a Bell Curve, and it is a common feature of a normal distribution.

What is Standard Deviation?

The standard deviation is a measure of how the values in your data differ from one another or how spread out your data is.

The standard deviation measures how far apart the data points in your observations are from each. You can calculate it by subtracting each data point from the mean value and then finding the squared mean of the differenced values; this is called Variance. The square root of the variance gives you the standard deviation.

Like how the mean tells you where the data is centered, the standard deviation gives you the width of your bell curve. It tells you how narrow or wide the bell curve is. Consider the example of income in rural and urban areas.

In rural areas, say a farming village, most people work in the same profession - farming. They all earn more or less the same, with the zamindar earning the most. Most people here make the same average income, as seen by the high peak at the mean. There is not much deviation in our data. Hence, the curve is relatively narrow.

In an urban city, the population is more. There are also more people doing different jobs which all pay at a very different level. Some people might be businessmen, while others might not even have a fixed income. This leads to more variation in the data, and hence, the curve is more spread out or has a higher standard deviation.

Now, understand standard deviation with the help of an example.

Consider the example of heights of dogs given below:

You first find the mean, or the average of all these values by adding them all up and dividing the resulting sum by the number of data points.

This means that on average, a dog is 394mm tall. Now, subtract all the data points from the mean.

Figure 5: Difference between heights and mean

Finding the square root of the variance gives you your standard deviation. In this case, it is 147 mm. This means that the curve is more tall than wide and has a small spread, and is narrow. There is not much deviation within the data.

What is Standard Normal Distribution?

It gives the actual weights of the students above the x-axis. But from the graph, you can see that the data points differ by 5 points. On finding the mean, you get it as 50, so you can take this as the 0th point. The rest of the points are equally spaced and, on standardizing, differ by 1, so you can rewrite the scale to be centered around 0 and increasing by 1. The points above the mean fall on positive values and below the mean fall on negative values.

When you standardize your data, calculating the probabilities in your graph becomes easier. You can also easily compare different graphs with one another, as they all have the same scale. Some features of a Standard Normal Distribution are given below:

The z-score is given by :

Let us represent each data point by ‘x’, then the formula for z-score becomes:

Now, understand the z-score with the help of an example. A summary of the daily travel time of a person commuting from work is given below. The values are in minutes. Calculate the Mean, Standard Deviation, and Z-Score.

The mean is the average of all values:

Now, subtract the mean from each data point and find the variance and standard deviation.

The Z-Score tells us where the data point falls relative to other points. The z-score will tell you how far away from the mean a point is in steps of your standard deviation. Now, calculate the z-score for each point :

Overall, it has standardized each value. You can plot a new graph with the mean at the center.

In this tutorial on Everything You Need to Know About the Normal Distribution, you looked at the normal distribution and how to recognize it. You then looked at standard deviation and realized the importance of standardizing our normal distribution. Finally, you explored the z-score with a solved example.

If you are keen on learning about Normal distribution and related statistical concepts, you could explore a career in data analytics. Simplilearn’s Post Graduate Program in Data Analytics is one of the most comprehensive online programs out there for this requirement. Offered in partnership with Purdue University, this applied learning program is designed with a curriculum and delivery methodology that offers job-ready training to its learners. From live virtual classes by real practitioners to plenty of projects and integrated virtual labs, masterclasses from Purdue faculty and IBM experts and the rare Ask-me-anything sessions and Hackathons by IBM, this has all the ingredients needed to get you started on a Data Analytics career and propel it ahead, fast! Explore now.

If you need any further clarifications or want to learn more about statistics and normal distribution, share your queries with us by mentioning them in this page's comments section. We will have our experts review them at the earliest. You can also understand the concept of normal distribution and other statistical concepts by checking out this video on our YouTube channel.