HomeResourcesSoftware DevelopmentData Structure TutorialWhat is Quick Sort Algorithm: How does it Work and its Implementation

What is Quick Sort Algorithm: How does it Work and its Implementation 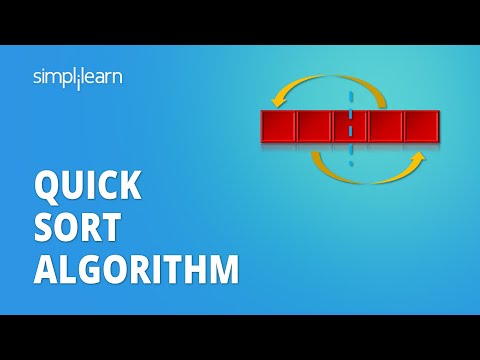 Tony Hoare, a British computer scientist, invented the QuickSort algorithm in 1959. The name "Quick-sort" stems from the fact that it can sort a list of data elements substantially faster (twice or three times faster) than any other sorting method.

Quicksort is one of the most efficient sorting algorithms. It works by breaking an array (partition) into smaller ones and swapping (exchanging) the smaller ones, depending on a comparison with the 'pivot' element picked.

By the end of this tutorial, you will have a better understanding of the fundamental technicalities of the Quick Sort with all the necessary details along with practical implementations.

What Is the Quick Sort Algorithm?

Quicksort is a highly efficient sorting technique that divides a large data array into smaller ones. A vast array is divided into two arrays, one containing values smaller than the provided value, say pivot, on which the partition is based. The other contains values greater than the pivot value.

Now, look at the working of the Quick-Sort algorithm to understand the Quick  Sort better.

How Does Quick Sort Work?

To sort an array, you will follow the steps below:

Let's have a closer look at the partition bit of this algorithm:

And this is how the QuickSort algorithm works. Now implement this algorithm through a simple C++ code.

How to Implement the Quick Sort Algorithm?

int i = (l - 1); // Index of smaller element and indicates the right position of pivot found so far

// When the actual element is less than the pivot

i++; // increment index of smaller element

//A function to implement quicksort

//pi is a partitioning index, and

//arr[p] is now in the correct location.

// partition and after partition

You have now explored the working of Quick Sort with a code. Now you will see some of the advantages of the Quick Sort.

What Are the Advantages of Quick Sort?

Let us discuss a few significant benefits of using Quick Sort and a few scenarios where Quick Sort is proven to be delivering the best performance.

What Are the Disadvantages of Quick Sort?

Despite it being the quickest algorithm, Quick Sort does a few downfalls. Let us address a few significant limitations that you should be considering before you implement Quick Sort in real-time.

With this, you have come to an end of this tutorial. You will now look at what could be your next steps to master other sorting algorithms.

If you're searching for a more in-depth understanding of software development that can help you carve out a successful career in the field, look no further. If that's the case, consider Simplilearn's Postgraduate Program in Full Stack Web Development, which is offered in collaboration with Caltech CTME, the world's largest technology education institution. This Post-Graduate Program will teach you how to master both front-end and back-end Java technologies, beginning with the fundamentals and progressing to the more advanced aspects of Full Stack Web Development. In this web development course, you'll study Angular, Spring Boot, Hibernate, JSPs, and MVC, which will help you to get started as a full-stack developer.

If you have any questions or require clarification on this "Merge Sort Algorithm" tutorial, please leave them in the comments section below. Our expert team will review them and respond as soon as possible.

Vaibhav Khandelwal is a proactive tech geek who's always on the edge of learning new technologies. He is well versed in competitive programming and possess sound knowledge of web development. He likes to read fictional and sci-fi novels and likes to play strategy games like chess.