HomeResourcesSoftware DevelopmentData Structure TutorialWhat Is An Algorithm? Characteristics, Types and How to write it

What Is An Algorithm? Characteristics, Types and How to write it 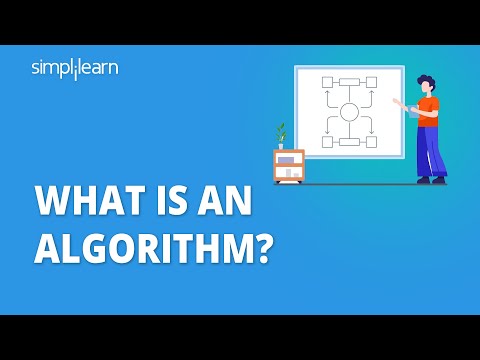 An algorithm is a step-by-step procedure that defines a set of instructions that must be carried out in a specific order to produce the desired result. Algorithms are generally developed independently of underlying languages, which means that an algorithm can be implemented in more than one programming language. Unambiguity, fineness, effectiveness, and language independence are some of the characteristics of an algorithm. The scalability and performance of an algorithm are the primary factors that contribute to its importance.

What is an Algorithm?

After defining what an algorithm is, you will now look at algorithm characteristics.

Characteristics of an Algorithm

An algorithm has the following characteristics:

Moving on in this What is an Algorithm tutorial, you will look at why you need an algorithm.

Why Do You Need an Algorithm?

You require algorithms for the following reasons:

It aids in your understanding of scalability. When you have a sizable real-world problem, you must break it down into small steps to analyze it quickly.

How to Write an Algorithm?

Now, use an example to learn how to write algorithms.

Problem: Create an algorithm that multiplies two numbers and displays the output.

Algorithms instruct programmers on how to write code. In addition, the algorithm can be written as:

In algorithm design and analysis, the second method is typically used to describe an algorithm. It allows the analyst to analyze the algorithm while ignoring all unwanted definitions easily. They can see which operations are being used and how the process is progressing. It is optional to write step numbers. To solve a given problem, you create an algorithm. A problem can be solved in a variety of ways.

As you progress through this "what is an Algorithm" tutorial, you will learn about some of the components of an algorithm.

Factors of an Algorithm

The following are the factors to consider when designing an algorithm:

You will now see why an algorithm is so essential after understanding some of its components.

Importance of an Algorithm

There are two factors in which the algorithm is fundamental:

As you all know, theory cannot be completed without practical application. As a result, the significance of algorithms can be considered both theoretically and practically.

As you progress through this "what is an algorthim" tutorial, you will see algorithmic approaches.

Approaches of an Algorithm

Following consideration of both the theoretical and practical importance of designing an algorithm, the following approaches were used:

This algorithm uses the general logic structure to design an algorithm. It is also called an exhaustive search algorithm because it exhausts all possibilities to provide the required solution. There are two kinds of such algorithms:

This is a straightforward algorithm implementation. It enables you to create an algorithm in a step-by-step fashion. It deconstructs the algorithm to solve the problem in various ways. It allows you to divide the problem into different methods, generating valid output for valid input. This accurate output is forwarded to another function.

This is an algorithm paradigm that makes the best choice possible on each iteration in the hopes of choosing the best solution. It is simple to set up and has a shorter execution time. However, there are very few cases where it is the best solution.

It improves the efficiency of the algorithm by storing intermediate results. It goes through five steps to find the best solution to the problem:

Only integer programming problems can be solved using the branch and bound algorithm. This method divides all feasible solution sets into smaller subsets. These subsets are then evaluated further to find the best solution.

It is an algorithmic procedure that recursively and discards the solution if it does not satisfy the constraints of the problem.

Following your understanding of what is an algorith, and its approaches, you will now look at algorithm analysis.

Analysis of an Algorithm

The algorithm can be examined at two levels: before and after it is created. The two algorithm analyses are as follows:

In this context, posterior analysis refers to a practical analysis of an algorithm. The algorithm is implemented in any programming language to perform the experimental research. This analysis determines how much running time and space is required.

Moving on in this "what is an algorithm" tutorial, you will now look at the complexity of an algorithm.

The Complexity of an Algorithm

The algorithm's performance can be measured in two ways:

The time complexity of the loop statement in the preceding code is at least n, and as the value of n escalates, so does the time complexity. While the code's complexity, i.e., returns mul, will be constant because its value is not dependent on the importance of n and will provide the result in a single step. The worst-time complexity is generally considered because it is the maximum time required for any given input size.

The space is required for an algorithm for the following reasons:

Finally after understanding what is an algorithm, its analysis and approches, you will look at different types of algorithms.

There are two types of algorithms:

Every day, you look for something in your daily life. Similarly, in the case of a computer, a large amount of data is stored in the computer, and whenever a user requests data, the computer searches for that data in the memory and returns it to the user. There are primarily two methods for searching data in an array:

The searching algorithm is of two types:

Linear search is a simple algorithm that begins searching for an element or a value at the beginning of an array and continues until the required element is not found. It compares the element to be searched with all the elements in an array; if a match is found, the element index is returned; otherwise, -1 is returned. This algorithm can be applied to an unsorted list.

Sorting algorithms rearrange elements in an array or a given data structure in ascending or descending order. The comparison operator decides the new order of the elements.

Now that you have completed the tutorial on "what is an algorithm," you will summarise what you have learned so far.

Get a firm foundation in Java, the most commonly used programming language in software development with the Post Graduate Program In Full Stack Web Development.

Suppose you're searching for a more extensive study that goes beyond Software Development and covers the most in-demand programming languages and abilities today. In that case, Simplilearn's Post Graduate Program In Full Stack Web Development is the right choice for you. Explore this globally-recognized bootcamp program and be rest assured that completing this will  be the smartest move you can make to enter and grow in the software development profession.

Do you have any questions about this tutorial on what an algorithm is? If you do, please leave them in the comments section at the bottom of this page. Our specialists will respond to your questions as quickly as possible!