What is Backtracking Algorithm? Types, Examples & its Application 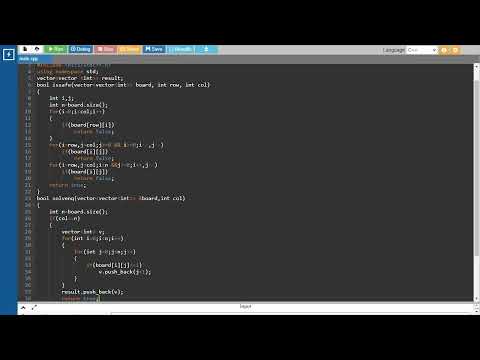 Backtracking is a general algorithm for solving some computational problems, most notably constraint satisfaction problems, that incrementally builds candidates to the solutions and abandons a candidate's backtracks as soon as it determines that the candidate cannot be completed to a reasonable solution. The backtracking algorithm is used in various applications, including the N-queen problem, the knight tour problem, maze solving problems, and the search for all Hamilton paths in a graph.

Backtracking is an algorithmic technique whose goal is to use brute force to find all solutions to a problem. It entails gradually compiling a set of all possible solutions. Because a problem will have constraints, solutions that do not meet them will be removed.

A backtracking algorithm uses the depth-first search method. When the algorithm begins to explore the solutions, the abounding function is applied so that the algorithm can determine whether the proposed solution satisfies the constraints. If it does, it will keep looking. If it does not, the branch is removed, and the algorithm returns to the previous level.

A space state tree is a tree that represents all of the possible states of the problem, from the root as an initial state to the leaf as a terminal state.

You will now look at how the algorithm works after you have learned what it is.

How Does a Backtracking Algorithm Work?

In any backtracking algorithm, the algorithm seeks a path to a feasible solution that includes some intermediate checkpoints. If the checkpoints do not lead to a viable solution, the problem can return to the checkpoints and take another path to find a solution. Consider the following scenario:

The final algorithm is as follows:

Moving on in this tutorial, you will now look at one example to help understand it better.

An Example of Backtracking Algorithm

Now, this tutorial is going to use a straightforward example to explain the theory behind the backtracking process. You need to arrange the three letters x, y, and z so that z cannot be next to x.

According to the backtracking, you will first construct a state-space tree. Look for all possible solutions and compare them to the given constraint. You must only keep solutions that meet the following constraint:

Nonetheless, valid solutions to this problem are those that satisfy the constraint that keeps only (x,y,z) and (z,y,x) in the final solution set.

When to Use a Backtracking Algorithm?

There are the following scenarios in which you can use the backtracking:

Following an example of a backtracking algorithm, you will now look at different types.

Backtracking must be described in this manner because it is a postorder traversal of a tree:

The solution vectors (z1, z2,... zs) are regarded as a global array z [1: n]. All of the possible elements for the zth position of the tuple that satisfy Bs are generated one at a time and then adjoined to the current vector (z1... zs-1). When zs is attached, a check is made to see if a solution has been found. When the for loop on line 7 is finished, there are no more values for zs, and the current copy of the backtrack ends.

X() returns the set of all possible values assigned to the solution vector's first component, z1. The component z1 will accept values that satisfy the bounding function B1 (z1).

As you progress through this tutorial, you will see some of the applications of the backtracking.

The backtracking algorithm has the following applications:

1. To Find All Hamiltonian Paths Present in a Graph.

A Hamiltonian path, also known as a Hamilton path, is a graph path connecting two graph vertices that visit each vertex exactly once. If a Hamiltonian way exists with adjacent endpoints, the resulting graph cycle is a Hamiltonian or Hamiltonian cycle.

2. To Solve the N Queen Problem.

There are numerous maze-solving algorithms, which are automated methods for solving mazes. The random mouse, wall follower, Pledge, and Trémaux's algorithms are used within the maze by a traveler who has no prior knowledge of the maze. In contrast, a person or computer programmer uses the dead-end filling and shortest path algorithms to see the entire maze at once.

You will look at the summary of what you have learned so far now that you’ve reached the end of this tutorial.

In this tutorial, you learned what a backtracking algorithm is and how it works, and the different types and their applications.

Simplilearn’s Post Graduate Program in Full Stack Web Development will be ideal for you if you want a more comprehensive study that goes beyond Mobile and Software Development Delivered in collaborations with Caltech CTME, this online coding bootcamp covers the most in-demand programming languages and skills needed for success in software development today. It's time to get out there and explore.

Do you have any queries about this Backtracking Algorithm? Please leave them in the comments section at the bottom of this page if you have any. Our experts will respond as quickly as possible!