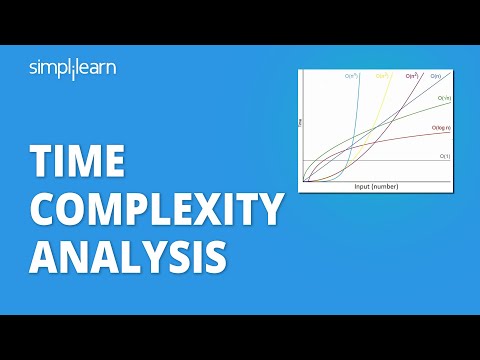 In this tutorial, you will explore computational complexity (space and time complexity), developed by Juris Hartmanis and Richard E. Stearns to assess the difficulty of an algorithm. As you all know, human nature strives to find the most efficient way to complete their daily tasks. The overarching thought process behind innovation and technology is to make people's lives easier by providing solutions to problems they may face.

In the world of computer science and digital products, the same thing occurs. To perform better, you need to write algorithms that are time efficient and use less memory.

An algorithm's complexity is a measure of the amount of data that it must process in order to be efficient. Domain and range of this function are generally expressed in natural units.

Time complexity is defined in terms of how many times it takes to run a given algorithm, based on the length of the input. Time complexity is not a measurement of how much time it takes to execute a particular algorithm because such factors as programming language, operating system, and processing power are also considered.

Also Read: What Is An Algorithm?

A priori analysis is the explanation of an algorithm's theoretical analysis. Assuming that all other variables, such as processor speed, are fixed and have no impact on implementation, an algorithm's efficiency is determined.

An algorithm's empirical analysis is referred to as a posterior analysis. Programming language is used to carry out the selected algorithm. The chosen algorithm is then put to use on the intended computer system. Actual data, such as running time and space requirements, are gathered for this investigation.

If N is used to represent the size of the input data and X is assumed to represent an algorithm, then the efficiency of X is mostly influenced by how much time and space it takes to implement the method.

Time Factor - The number of crucial operations, such as comparisons in a sorting algorithm, is counted or quantified to determine how much time has passed.

Space Factor - The amount of space is determined or assessed by adding together how much memory the algorithm can use.

When N is used as the size of the input data, the complexity of an algorithm f(N) gives the amount of running time and/or storage space required by the method.

The following are the factors that are crucial to an algorithm's long-term effectiveness:

Real-world programmers are bound by the physical memory of the systems on which they intend to run. This is where space complexity enters the picture because we never want to run a function or process that takes up more space than the system has available at any one time. On the other side, we don't want our operations to take too long, clogging and slowing down our apps.

Some algorithms perform better than others. We always prefer to select an efficient algorithm, hence metrics for assessing algorithm efficiency would be useful.