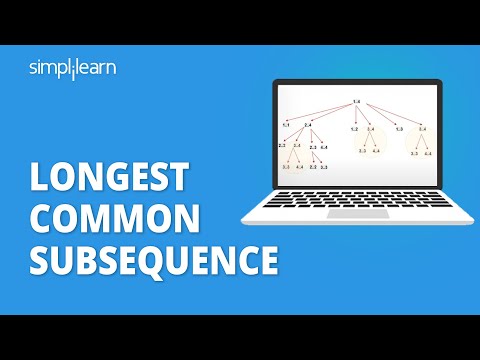 Problem-solving plays a significant role in programming interviews. Numerous product-based companies prefer assessing their applicants' core problem-solving abilities. And optimization problems are the must-haves for these programming interviews as these problems consist of complex and vast solution spaces. The longest common subsequence problem is also one of the classic optimization problems. So, in this article, we will understand this LCS problem in detail along with different ways to formulate its solution.

A subsequence is nothing but a series of elements that occur in the same order but are not necessarily contiguous. Suppose, A and B are two given sequences consisting of a finite set of characters. Then, we can say that C is a common subsequence of both A and B, if and only if C can be derived from A and B.

If two sequences are given in the LCS problem, then our task is to identify a common subsequence that has a maximum length. Let’s look at an example to understand this problem better. Consider two strings given below:

Now, let’s look at possible common subsequences for both S1 and S2.

Let’s say that we are given two sequences S1 and S2, having lengths m and n, respectively. And we want to find out the longest common subsequence using the naive recursive approach. In order to do that, the first step we can perform is to determine if each subsequence of S1 is also a subsequence of S2 or not.

If you look into the code of LCS function, you will find three evaluation conditions as mentioned below:

The program given below follows the strategy mentioned above to find out the length of longest common subsequence.

Output: The console output for the program above is represented in image below.

Explanation: By following the conditions mentioned above, we can find out the length of longest common subsequence. The call stack for this recursive algorithm will be as represented in the image given below:

The evaluation of the length of LCS (denoted as sum) is done as represented below:

For this simple LCS problem, we get a vast solution space. Also, the time-complexity is going to increase at an exponential rate (O(2n)) as it is dependant on the depth of recursive tree

(2(depth of recursive tree)). Due to huge time and space complexity, this naive recursive solution is not an ideal solution for this longest common subsequence problem. Hence, in the next section, we will look into a more reliable and optimal approach to solve this problem.

Solution: Let’s look into the steps to implement a bottom-up solution for our LCS problem.

The C program based on the strategy mentioned above is given below:

Output: The console output for the dynamic programming implementation of LCS is given below:

Explanation: The dynamic programming approach cuts down the number of function calls. It saves the outcome of each function call; so that it can be reused without the need for duplicate calls in the future. The results of each comparison between elements of A and B are maintained in tabular format to remove redundant computations.

In this longest common subsequence problem article, you learned what the LCS problem is with the help of examples. You also discovered the recursive solution to the LCS problem, along with its complexity analysis. After that, you looked into a more optimal approach to implement the LCS solution, which is known as dynamic programming. Finally, you came across the strategy and program to build a bottom-up dynamic programming solution.  If you want a drive-through explanation to understand and implement the longest common subsequence problem, we advise you to watch this video:

Every day, new products, tools, and apps are being introduced in the market. And there are hundreds of programming languages and frameworks being utilized every day in the realm of software development. Hence, it's crucial for you to go beyond data structure concepts and cover the foundations of interactive application development. Simplilearn's Software Development Courses provide the right platform for you to master the art of software development. The courses can help you improve your odds of becoming a successful software developer. So, go ahead and start exploring!

If you have any questions or need clarification on any topic from this article on the longest common subsequence, please leave them in the comments section below and we will respond to them soon!