The Best Introduction to What Generative Adversarial Networks (GANs) Are

Lesson 15 of 18By Avijeet Biswal 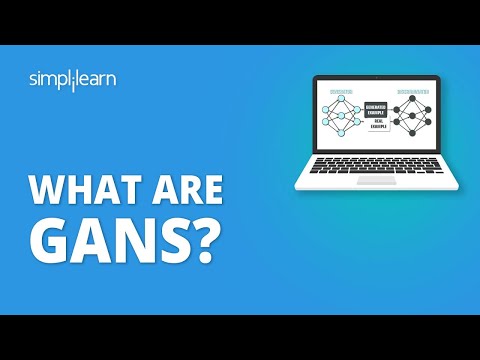 Deep Learning has found numerous applications in the industries. Neural networks are being widely used in almost every business sector, such as healthcare, finance, and e-commerce. These neural networks help solve business problems. In this article, we’ll learn about What GANs are.

What are Generative Adversarial Networks?

Generative Adversarial Networks (GANs) were introduced in 2014 by Ian J. Goodfellow and co-authors. GANs perform unsupervised learning tasks in machine learning. It consists of 2 models that automatically discover and learn the patterns in input data.

The two models are known as Generator and Discriminator.

They compete with each other to scrutinize, capture, and replicate the variations within a dataset. GANs can be used to generate new examples that plausibly could have been drawn from the original dataset.

What is a Generator?

A Generator in GANs is a neural network that creates fake data to be trained on the discriminator. It learns to generate plausible data. The generated examples/instances become negative training examples for the discriminator. It takes a fixed-length random vector carrying noise as input and generates a sample.

The backpropagation method is used to adjust each weight in the right direction by calculating the weight's impact on the output. It is also used to obtain gradients and these gradients can help change the generator weights.

Let’s see the next topic in this article on what GANs are, i.e., a Discriminator.

What is a Discriminator?

The Discriminator is a neural network that identifies real data from the fake data created by the Generator. The discriminator's training data comes from different two sources:

Now, let’s learn how GANs work in this article on ‘What are GANs’.

How Do GANs Work?

GANs consists of two neural networks. There is a Generator G(x) and a Discriminator D(x). Both of them play an adversarial game. The generator's aim is to fool the discriminator by producing data that are similar to those in the training set. The discriminator will try not to be fooled by identifying fake data from real data. Both of them work simultaneously to learn and train complex data like audio, video, or image files.

The Generator network takes a sample and generates a fake sample of data. The Generator is trained to increase the Discriminator network's probability of making mistakes.

The mathematical equation for training a GAN can be represented as:

With this understanding, let’s learn the next topic on what are GANs, i.e. training a GAN.

Let us now look at the different types of GANs.

Conditional GANs: Vanilla GANs can be extended into Conditional models by using extra-label information to generate better results. In CGAN, an additional parameter ‘y’ is added to the Generator for generating the corresponding data. Labels are fed as input to the Discriminator to help distinguish the real data from the fake generated data.

Now that we have understood what are GANs, let’s look at some of the important applications of GANs.

Below is an example of a text to image translation using GANs for a bird with a black head, yellow body, and a short break.

After reading this article, you would have learned the basics of GANs and how it works. You understood about generators and discriminators. You saw how GANs can help identify real and fake images. You looked at the training process of the Generative Adversarial Network and the applications of GANs.

Do you have questions related to this article on What are GANs? If you have, then please put them in the comments section of this article. Our team will help you solve your queries.