Lesson 59 of 65By Baivab Kumar Jena 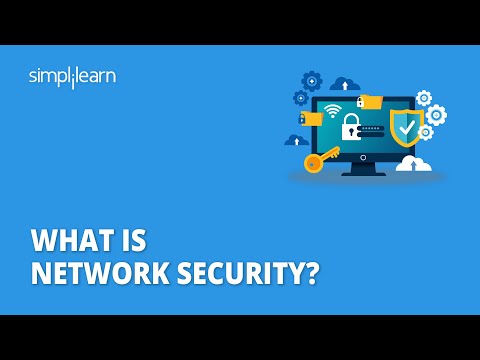 The world runs on data now. The internet houses a treasure trove of potentially harmful information, from basic shopping habits to private financial transactions. All this data is carried over a network of interconnected devices. During transit, the data is as secure as the mechanism responsible for its transmission. It is in this phase that most corrupted data originates. So in today's article on 'what is network security,' we will cover the important frameworks that govern the rules and policies required to secure our networks against malicious attacks.

What Is Network Security?

A group of technologies known as network security guards against a wide range of possible dangers from entering or spreading inside a network, preserving the usefulness and integrity of a company's infrastructure. An architecture for network security includes tools for securing both the network and the applications that use it. Multiple automated, scalable layers of defense are used in effective network security techniques. Each defensive layer enforces a set of security policies chosen by the administrator.

Network security is crucial for both personal and professional networks. Most houses with high-speed internet have one or more wireless routers, which can be vulnerable to attacks if they are not adequately secured. Data loss, theft, and sabotage risk may be decreased with the use of a strong network security system.

Your workstations are protected from hazardous spyware, thanks to network security. Additionally, it guarantees the security of shared data. By dividing information into various sections, encrypting these portions, and transferring them over separate pathways, network security infrastructure offers multiple levels of protection to thwart MiM attacks, preventing situations like eavesdropping.

Now that we understand what network security is, let us go through the working mechanism behind the concept.

How Does Network Security Work?

There are three types of network security as a whole, the first being physical security.

This is the first fundamental level, which involves preventing unauthorized employees from gaining control of the network's secrecy. External accessories and routers that may be utilized for cable connections are examples of this. Biometric systems, for example, may do the same thing. Physical security is crucial, especially for small businesses that may not have as many resources to spend on security staff and systems as bigger corporations.

It mostly focuses on safeguarding data either kept in the network or engaged in network transitions. This kind fulfills two functions. One is a defense against unauthorized users, while the other is against malevolent actions.

The last category we have to go through is administrative network security.

This network security degree safeguards user behavior, such as how permission is authorized and the process works. This also assures the complexity required to safeguard the network from threats. This level also identifies infrastructural modifications that are required.

Moving on to the next topic of our article on network security, we will cover some benefits of deploying a strong security perimeter at the network level.

In an active attack, the intruder attempts to disrupt the network’s normalcy, modifies the information, and tries to alter the system resources.

In a passive attack, the intruder intercepts data that travels through the network. Here, the intruder eavesdrops but does not alter the message.

As shown in the diagram below, the attacker captures the data packets and copies the contents to use them later.

The objectives for cyber assaults can be as varied as the offenders, although they are typically initiated for financial gain. Whether industrial spies, hacktivists, or cybercriminals, these bad actors all have one thing in common: how quick, clever, and covert their attacks are.

The human aspect continues to be the cyber security system's weakest link. Insider risks can originate from current or former workers, third-party vendors, or even trusted partners, and they can be unintentional, careless, or downright evil. Aside from that, the rapid expansion of remote work, personal devices used for business purposes, and even IoT devices in remote locations can make these threats easier to undetect until it's too late.

It is nearly impossible for employees to function when networks and personal devices are slashed by viruses and other cyberattacks on the operation of websites and for the company to run. You may significantly minimize violations and the downtime required to fix the breach by implementing various cyber security measures, such as enhanced firewalls, virus scanning, and automatic backups.

Customer retention is one of the most crucial elements in business development. Customers today place a premium on maintaining brand loyalty through a strong cyber security stance since this is the fastest way to get their business back, get referrals, and sell more tickets overall. Additionally, it helps manufacturers get on the vendor list with bigger companies as a part of their supply chain, which is only as strong as its weakest link.

Are You Ready to Become a Network Security Professional?

So, how can we ensure network security? The best and simplest way of ensuring network security is by ensuring our passwords are complex everywhere. Simplilearn offers a "Cybersecurity Expert" course that focuses on such cybersecurity techniques and how to protect yourself from cyber attacks. The course is recommended for people looking to join the cybersecurity industry, as it covers basic and advanced modules that cater to beginners and professionals alike.

If you have any queries regarding this topic, feel free to ask them in the comment section below, and we will be happy to answer them.