Lesson 35 of 60By Anmol Kapoor 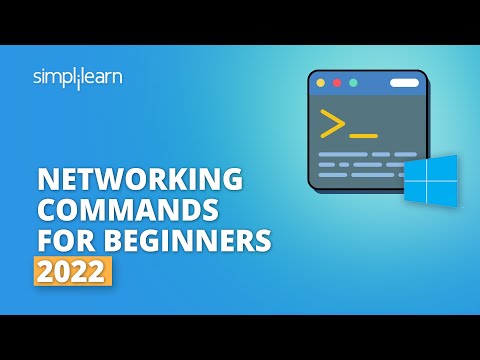 The Windows operating system provides its user with a powerful tool, i.e., Command Prompt, which allows us to access and configure system settings and data. In this article on ‘Networking Commands’, we will look into some of the most popular network commands.

These network commands prove helpful when there is a need to configure or troubleshoot the network settings of our system.

What Are Networking Commands?

Every system is connected to numerous different networks and systems through internal or external network channels. These network settings often run into issues and affect the system’s working. Such network problems can be resolved using ‘networking commands.’

Next, let’s take a look at the networking commands,

The below mentioned commands are some of the most useful commands required to troubleshoot network problems and configure network settings.

The IPCONFIG network command provides a comprehensive view of information regarding the IP address configuration of the device we are currently working on.

The IPConfig command also provides us with some variation in the primary command that targets specific system settings or data, which are:

Command to enter in Prompt - ipconfig

The NSLOOKUP command is used to troubleshoot network connectivity issues in the system. Using the nslookup command, we can access the information related to our system’s DNS server, i.e., domain name and IP address.

Command to enter in Prompt - nslookup

The HOSTNAME command displays the hostname of the system. The hostname command is much easier to use than going into the system settings to search for it.

Command to enter in Prompt - hostname

The Ping command is one of the most widely used commands in the prompt tool, as it allows the user to check the connectivity of our system to another host.

The TRACERT command is used to trace the route during the transmission of the data packet over to the destination host and also provides us with the “hop” count during transmission.

Using the number of hops and the hop IP address, we can troubleshoot network issues and identify the point of the problem during the transmission of the data packet.

Command to enter in Prompt- tracert IP-address OR tracert www.destination_host_name.com

The Netstat command as the name suggests displays an overview of all the network connections in the device. The table shows detail about the connection protocol, address, and the current state of the network.

Command to enter in Prompt - netstat

The ARP command is used to access the mapping structure of IP addresses to the MAC address. This provides us with a better understanding of the transmission of packets in the network channel.

Command to enter in Prompt - arp

Using the SYSTEMINFO command, we can access the system’s hardware and software details, such as processor data, booting data, Windows version, etc.

Command to enter in Prompt - systeminfo

In this article on ‘Networking Commands’, we understood the need of using network commands and the way to implement them in the Windows command prompt. We also learned about the different network commands to troubleshoot and configure the system's network settings.

If you want to learn more about implementing networking commands in the system to access and troubleshoot network settings, you can refer to Simplilearn’s Cyber Security Expert course. By the end of this professional course, you will be able to perform network-related tasks much more efficiently.

Do you have any questions related to this tutorial on ‘Networking Commands’? If yes, feel free to mention them in the comment section at the bottom of this page. Our team will help you solve your queries ASAP.