HomeResourcesSoftware DevelopmentProgramming Tutorial for BeginnersEverything To Know About Coding, Decoding, And Reasoning With Questions & Answers

Everything To Know About Coding, Decoding, And Reasoning With Questions & Answers

Lesson 5 of 15By Simplilearn 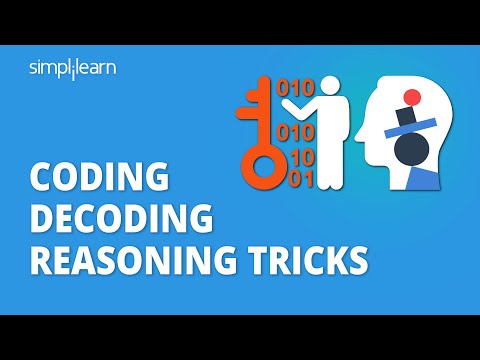 Coding, Decoding, and Reasoning are some of the most complex topics in the Reasoning section. This section is one of the most common sections included in all the major competitive exams dedicatedly designed for hiring processes and higher education. Many candidates find Coding-Decoding and Reasoning questions challenging to solve, and as a result, they avoid attempting these scoring questions and lose some easy and quick marks.

So, to make it easy to solve and clear the exam, this article on Coding, Decoding, and Reasoning will equip you with some tricks and tips, and examples to make you feel better and easy while solving.

What Is Coding, Decoding and Reasoning?

All three terms could be a little complex to understand, so let us learn each one of them with the help of their definitions.

Coding is a part of the logical reasoning section used to encrypt words, numbers in specific patterns or codes using particular rules and regulations.

Decoding is the process that is used to decrypt the patterns into original forms from the given forms.

The Reasoning is designed to measure the aptitude or ability of a person logically.

Why Learn Coding, Decoding and Reasoning?

Coding, Decoding, and Reasoning play a vital role in competitive examinations. Almost every job needs some particular skills. The basic skills necessary to get a job are aptitude skills; these play an important role in qualifying for the further rounds.

At present, every job has entrance tests where applicant skills will be examined. Every entrance exam involves some kind of aptitude round, which is filled with these kinds of questions. So Coding holds a significant role in those kinds of jobs.

Every company is concentrating more on these rounds to recruit employees.

These Coding, Decoding, and reasoning skills also help to improve knowledge and enhance your skills by logical thinking.

The above mentioned are a few reasons why you learn coding, decoding and reasoning skills. Now, you will understand some types of coding and decoding with the examples below.

Types of Coding-Decoding With Examples

The types are classified in several categories, but this tutorial deals with the types which have a huge impact at the present in this coding, decoding, and reasoning scenario.

Letter Coding is a type in which the letters are replaced with other letters.

Take an example of Letter Coding:

Q) MONKEY is coded as "KMLICW", then what should be the code for ORANGE.

Explanation: To solve these kinds of problems, you have to remember that every alphabet has a specific number.

So, according to the question,

MONKEY - the code for money is

In the same way, "KMLICW" is coded as

If you observe both the given word and, it is coded by decreasing 2 for each alphabet.

So, in the same way, to code "ORANGE", the same number should be decreased.

So you code "ORANGE" as:

So, in the same way, it decreased each alphabet by 2

And you should code the word as "MPYLEC".

Explanation: The code of every letter is already specified in the question itself, so no need to use fixed codes of the letters.

Now, specify the number of each letter to solve the problem. If you observe the two words, some of the letters are repeated, so no need to write the repeated letters.

In substitution coding, it assigns particular objects to code names. Then a question is asked to solve the answer in the same pattern.

Now, have a look at the example for a clear understanding.

Explanation: As we know, the blood is red. So if you observe the above question, it is mentioned that white is called red and red is called blue.

So blood is red by using the substitution method, the answer would be blue.

In this type of question, three or four complete messages are provided in the coded language, and the code for the particular word is asked. To analyze such codes, and if any two messages bearing the common word, are picked. The common code word will be that word.

Q) In the code language,

What does ‘are’ stand for?

Explanation: If you observe the question, it is mentioned that both the 1st and 2nd statements are repeated.

So the common word in both these statements is KA. The rest of each word is different. So, "are" stands for ka.

So, according to mixed letter coding, "are" stands for "ka".

In this mixed number-coding question, three or four complete messages are given in the coded language, and the code number for a particular word is asked.

These are a few types of coding and decoding types. Now, walk through learning some tricks and tips to learn reasoning in this coding, decoding, and reasoning tutorial.

Tricks to Learn Reasoning With Examples

In this tutorial about coding, decoding, and reasoning, you have covered 12 reasoning-type concepts and their examples.

Number Series is a sequence of numbers that follows some pattern where candidates need to find the missing or wrong number in the provided series.

Let's have a look at an example to enable your clear understanding of the concept.

In the same way, all the alternate numbers are increased and decreased.

So according to order, it should increase the following number by "5" so the next number in the series is "25".

In this type of reasoning question, you have four words. All words, except one, are related to others in the same manner. Three words among the four words will be with the same classification. You have to select the odd one.

So the odd one on the list is "Bottle".

Q) Statement: Some kings are queens. All queens are beautiful.

Explanation: As mentioned in the above question, only one premise is particular. So the conclusion should also be particular.

So the answer would be neither 1 nor 2 follows the given statement.

Analogical Reasoning or argument by analogy can be defined as a specific way of thinking, based on the idea that because two or more things are similar in some respects, they are probably also similar in some further respect.

Explanation: If a glass is thrown or falls, it should break. So, related to the first one, the fire would burn.

According to the analogies, the answer would be "fire."

Letter and Symbol Series are a sequential order of letters, numbers, or both arranged in a way that each term in the series is obtained according to some specified rules. These rules are based on mathematical operations, place of letters in alphabetical order. Letter series is a logical arrangement of letters of the English alphabet arranged in a specified pattern.

Explanation: If you observe, the first letter of every word is replaced with the following letter. And the second and third are replaced with alternate letters.

So the following word in the series is "VIJ."

Statement and conclusions topic comprises a statement followed by a set of conclusions for the same. Candidates need to choose the most appropriate conclusion regarding the given statement.

Explanation: If you observe the question, all 78% runs are scored by all-rounders. So, one doesn't follow. And nothing is mentioned about middle-order batsmen. So, two also don't follow.

So the conclusion would be neither 1 nor 2 follows.

Cause and effect is a relationship between events or things, where one is the result of the other or others. This is a combination of action and reaction. Something happens (a cause) that leads to an effect.

Explanation: If you observe, statement 1 is the cause, and statement 2 is the effect. And the solution for the above questtoion is.

Virat is nervous, he went to the hospital to consult a doctor.

Verbal Reasoning is understanding and Reasoning using concepts framed in words. It aims at evaluating the ability to think constructively rather than at simple fluency or vocabulary recognition.

Let's have a look at an example.

Explanation: If you observe the statement, smoking causes pollution. So the war leads to destruction.

According to the concept, the solution would be destruction.

Game Logic is a modal logic that extends Propositional Dynamic Logic by generalizing its semantics and adding a new operator to the language. The logic can be used to reason about determined 2-player games.

Now, have a look at the example.

Q) Virat, Dhoni, and Rohit were 3 brothers. Observe  the following statements and find which of them is the youngest.

So the answer would be Virat is the youngest.

Let's have a look at an example.

Q) What could be the meaning of Miss-Guys?

Explanation: In the first and last statement, Hello is the common word, so the meaning of "eherf" is "Hello". And the meaning of "tuls" is "Guys", and "miss" is "opwse".

And the answer would be "opwsetuls".

In statement and assumption question, we give a statement in the question, followed by a few assumptions made on the basis. Candidates need to pick up the assumption which is most appropriately and logically correct.

Now have a look at the example.

Explanation: In both the statements, nothing is mentioned about the lather. So the 1st is not implicit. As the detergent is used to clean clothes quickly and easily, so 2nd is implicit.

Essential Part is one of the important topics in the Logical Reasoning section. An Essential Part Questions, each question contains a word followed by the answer choices.

Let's have a look at an example of the Essential Part.

Explanation: In the above example, the company cannot run without employees. The other three are also crucial in the company, but the essential is an employee without an employee; the rest is useless.

As per the essential part concept, the answer would be "employees".

This tutorial on Coding, Decoding and Reasoning will guide you to learn and perform better in all job related examinations.  It will also be beneficial for beginners to help to gain more knowledge.

If you are interested in starting your career, feel free to visit Simplilearn's website. Explore the Post Graduate Program in Full Stack Web Development in collaboration with Caltech CTME. The program is a comprehensive Bootcamp designed to offer online career-oriented training guiding learners with varied levels of expertise through the concepts of coding and programming. With a globally recognized certificate and multiple unique benefits, this program will set you on your way to becoming an accomplished Full Stack Developer.

If you have any queries or concerns regarding this tutorial on coding, decoding, and reasoning, feel free to mention them in the comments section below. And our experts will be happy to resolve all your queries.