Lesson 14 of 15By Kartik Menon 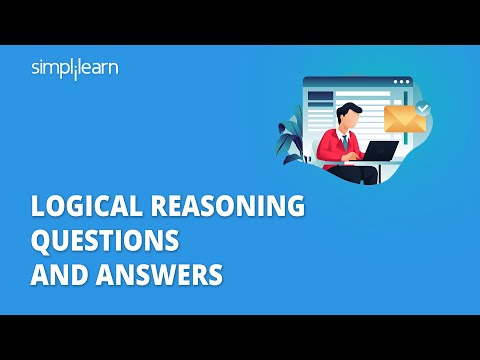 The aptitude exam is the first step in every placement process. And it's no surprise that a majority of students are weeded out in this round itself. It makes no difference how strong your technical knowledge and communication skills are if you don't make it through the aptitude rounds. Logical reasoning is an important component of these aptitude exams, accounting for over 33% of the total score. So, in this logical reasoning questions tutorial, you will look into the most commonly asked sections of logical reasoning.

What Is Logical Reasoning?

In non-verbal reasoning problems, it will provide you with the concept in the form of numbers, figures, or diagrams. Moving forward in this logical reasoning questions tutorial, you will explore a few topics that contribute to maximum questions in the aptitude tests.

Coding is a technique used to encrypt words or numbers in specific patterns using particular rules and regulations. In more technical terms, it is also referred to as encryption. And it is widely used across all the messaging platforms to protect the context that users are communicating. The logic these encryptions follow is known as its key, and determining this key is an imperative task in these coding problems.

Now, have a look at a problem that deals with coding.

Problem Statement: In a certain language, KINEMARTOPHOBIA is written as KNIEAMROTPOHBAI, then how HILLARIOUS will be written in the same language?

Solution: In every triad, the second and third characters are interchanging their positions. And if you abide by the same logic, hilarious will get converted into:

Moving forward, you will discover decoding.

Decoding is the process of decrypting the patterns into original forms. In order to achieve decoding, you will require the logic of encoding. So, in these types of problems, you will have to figure out the key or logic of encoding. Let’s have a look at a problem based on decoding.

Problem Statement: In a certain language, BOOK is written as 4300, MATE is written as 3900. Then 1600 will represent which word out of given alternatives?

Similarly, for the word MATE-

From both these examples, you can say that there is no logic behind two trailing zeros. This means the right alternative should have 16 as the character summation value. And CAGE is the option with that possibility.

Solution: By drawing an inference from the statements given above, you can arrange the six persons in a straight line.

Looking at this arrangement, you can point out that Z is the right answer.

Circular Arrangement Problem: P, Q, R, S, T, U, and V are sitting around a circular table facing the center.

Which of the following pairs has the first person sitting to the immediate left of the second person?

Here’s the arrangement of seven persons in a circular shape.

By looking at this circular representation, you can say that SV is the right alternative since S is available at the left position of V. Moving forward, in this logical reasoning questions tutorial, you will discover the section of series completion.

In this section, the candidate is entrusted with recognizing a pattern in a given set of numbers or letters. Following that, they must either choose an option that implements the same logic in a series or discover the phrase that disrupts the logic of sequence. In the series completion questions, you will encounter three sorts of sequences:  alphanumeric, alphabetic, and numeric. Now, discover logical reasoning questions based on these three sequences.

Solution: The logic that this series follows is represented in the box below:

Alphabetical Series Problem: Look at this series: WFB, TGD, QHG,? And find the right alternative to replace the question mark (?).

Solution: Usually, the logic of encoding resides in alphabetical sequencing for this type of series completion problem. The first character for the next term will be:

The middle character follows the pattern:

The last character for the next term in sequence will be:

Thus, the answer to this question is option 2- NIK.

Solution: Alphanumeric sequences contains both numerical and alphabetical logic. This particular sequence can be converted into three pieces such as:

The first letter of the next term will be:

The middle numeric part follows the logic as shown in the illustration below:

Next, you will discover the section of direction sense in logical reasoning questions.

Direction sense questions often include a person moving in a sequence of directions that include multiple turns. These logical reasoning questions are meant to assess the candidate's ability to perceive direction using pen and paper. In these types of questions, typically, data about a person traveling in different directions are provided, and finally, you have to calculate either the total distance traveled by the person or the direction of the person from his initial position.

Solution: Drawing the path traveled by a person is the ideal way to formulate an answer to this type of question. To begin, you must grasp how to express eight directions (4 main + 4 cardinals) on paper. The diagram given below will provide you with the schematic of direction representation.

By following each statement, you must plot the path that Lokesh covers.

Next, in this logical reasoning questions tutorial, you will discover the section of blood relationship questions.

Problem Statement: "He is the son of the only son of my grandfather," Lauren says, pointing to a photograph. How is the man in the photograph related to Lauren?

The standard clock is of circular shape, and it is divided into 12 different divisions. The angle between subsequent divisions is calculated by dividing the total clock angle of 360° by the number of divisions, which is 12.

And if you observe further, each division is further divided into 5 parts representing 1 minute each. And you know that angle between each division is 30 degrees. So, if you divide that by 5, you will get the angle covered by a minute hand in a single minute.

Also, you are aware that both the minute hand and hour hand always move in the same direction. Hence, you can calculate the relative angular displacement using angle-covered equations.

Any angle more than 180 degrees is called Reflex Angle. And while solving clock questions, you must try to refrain from them. So, you will convert this reflex angle by subtracting it from 360.

Using angular displacement per hour and per minute, you can formulate the equation for Angle Between Hands of Clock = |30(H)-112 (M)|

Now, look into a sample problem to comprehend the application of this formula.

Problem Statement: Find the angle between hands of the clock when the time is 5.30.

A calendar is a chart that shows the days, weeks, and months of a given year or provides seasonal information. Here, you’ll face logical reasoning questions based on leap year, odd days, a day on a particular date, etc. Let’s look into a few basic calendar concepts.

There are two types of years: ordinary and leap. An ordinary year has 365 days, whereas a leap year has 366 days. A leap year arrives after the cycle of 4 years. Also, if you divide 365 by 7, you will get 1 as the remainder, which is considered an odd day. Similarly, a leap year has two odd days.

For months, you can compute odd days by dividing the day count in a month by 7. The precomputed odd day values for months are as given below:

You also have predefined codes for days in a week to make computation easier.

On that note, look at one sample logical reasoning question based on a calendar.

Problem Statement: Find what day you will have on 20th April 2040.

Solution: To answer this question, you must break down the given date into five sections, as shown in the chart below.

The leap year section value can be calculated by dividing the ordinary year value by 4. Therefore, Leap Year =404=10.

The next step will be calculating odd day values for all five sections. For months you have already seen precomputed odd day values.

Similarly, you also have predefined odd-day values for centuries.

Here, for the ordinary year and leap year section, you have odd day values greater than 7. Hence, you will again divide those values by 7 and add remainders of that operation as new odd day values.

Finally, you will add these values and again divide that resultant value by 7 to find out the code for the day on 20th April 2040.

Friday has been assigned with day code value 5. Thus, Friday is the right answer to this question.

If you are a working professional who wants to start a management career by studying for an MBA while still working in a C-suite job. Then an online MBA could be a brilliant option for you. Simplilearn's PGDM program, in cooperation with JAGSOM, can prepare you to be a business leader. This program provides a number of MBA specializations, including Digital Marketing, Operations, Business Analytics, and Data Analytics. After successful completion of this course, you will earn an accredited management degree. So, go ahead and start exploring!

If you have any questions or need clarification on any section of this logical reasoning questions tutorial, please leave them in the comments section at the bottom of this page; we will respond to them soon.