Beginners Guide to What Is Arduino?

Lesson 21 of 22By Simplilearn 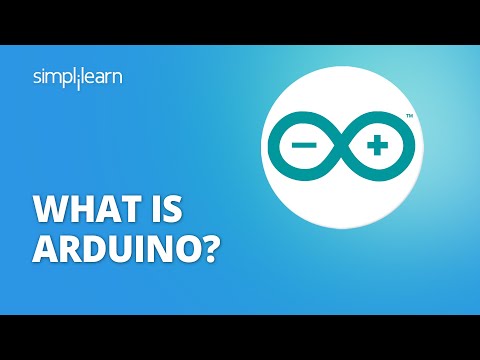 The Arduino platform has grown in popularity among those just getting started with electronics and for good purpose. In contrast to the majority of earlier programmable circuit boards, to load new code onto the Arduino, you don't need a separate piece of hardware. All you need is a USB cable. If you're curious about learning and knowing more about Arduino, then you're in the right place. This tutorial will give you a brief idea about what Is Arduino.

Audrino is an open-source electronic gadget that reads inputs (such as light on a sensor, a finger on a button, or a tweet) and generates outputs based on those inputs (such as turning on an LED or activating a motor). Audrino was created at the Ivrea Interaction Design Institute as a simple tool for students with no prior experience with electronics or programming. After acquiring popularity, it evolved to meet new demands and obstacles.

Arduino boards are microcontrollers, not entire computers with operating systems of their own, like the Raspberry Pi. They just run C/C++ code that is stored in their firmware. The Arduino Integrated Development Environment (IDE) is free software that allows you to create and upload code to an Arduino board.

Arduino has been used in millions of projects and applications because of its simple and accessible user interface. The Arduino software is simple to use for beginners, but it is customizable for advanced users. It works on Mac, Windows, and Linux systems. It can be used by teachers and students to create low-cost scientific equipment, to demonstrate chemistry and physics principles, and to begin learning programming and robotics. Designers and architects create interactive prototypes, while musicians and artists create installations and try out new instruments. Many of the products on display at the Maker Faire, for example, are made with it by makers. Arduino is a valuable tool for learning new skills. Anyone, including youngsters, amateurs, artists, and programmers, can begin tinkering by simply following the step-by-step instructions.

Arduino Uno includes everything you'll need to get started. It has 14 digital input/output pins (which can be used as PWM outputs), six analog inputs, a USB port, a power jack, and a reset button, among other features. It comes with everything you'll need to get started with the microcontroller; plug it into a computer with a USB cable or power it with an AC-to-DC adapter or battery.

LilyPad is a wearable e-textile device created by Leah Buechley and designed in collaboration with SparkFun. It cleverly constructed each LilyPad with large connection pads and a flat back to sew conductive thread into garments. In addition, the LilyPad features its own set of input, output, power, and sensor boards designed exclusively for e-textiles and can even be washed!

The Arduino IDE can program the RedBoard over a USB Mini-B connector. It will run on Windows 8 without requiring changes to your security settings (you used signed drivers, unlike the UNO). Because of the USB/FTDI chip you used, it's more sturdy, and it's fully flat on the back, making it easier to integrate into your projects. Connect to the board and choose "Arduino UNO" from the board menu to upload code. The RedBoard can be powered through USB or the barrel jack. The onboard power regulator can handle voltages ranging from 7 to 15 volts DC.

The Arduino Mega is the larger brother of the Arduino UNO. It contains many digital input/output pins (54! ), 16 analog inputs, a USB connection, a power jack, and a reset button. It comes with everything you'll need to get started with the microcontroller; plug it into a computer with a USB cable or power it with an AC-to-DC adapter or battery. This board's enormous number of pins makes it ideal for applications that require a large number of digital inputs or outputs (like lots of LEDs or buttons).

The Leonardo is Arduino's initial development board with a single microcontroller and USB port. As a result, it may be less expensive and easier. Additionally, because the board handles USB directly, code libraries are available that allow the board to imitate a computer keyboard, mouse, and other components.

Hope this tutorial on ‘What is Arduino’ gave you a good insight into the platform and its features. Course certification will benefit you if you plan to study these technologies and work as a developer or programmer.

If you want to learn Arduino and the programming language and work as a developer or programmer, course certification will help you. Enroll in the Internet of Things (IoT) Course.

If you have any specific queries about ‘what is Arduino’, don't hesitate to contact us. Please leave any recommendations or questions about using Arduino projects in the comments area. Our professionals will respond as quickly as possible!