The Top 10 Awesome Arduino Projects Of All Time

Lesson 27 of 31By Simplilearn 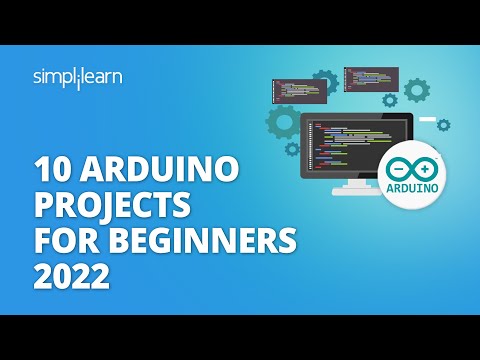 The Arduino platform has become increasingly popular among those just getting into electronics. Unlike Earlier programmable circuit boards, Arduino does not require a separate piece of hardware to load new code. A USB cable is all that is required. If you're interested in learning more about Arduino and creating different projects, you've come to the right place. This tutorial will give you a brief idea about the projects that can be made using Arduino.

You frequently need to lock an area in your home or place of business so that no one can enter without our permission and your important accessories and assets are not stolen or lost. Today's security systems use fingerprints, retina scanners, iris scanners, face IDs, tongue scanners, RFID readers, passwords, pins, patterns, and other biometrics to authenticate users. Using an Arduino-based password or pin-based system is the most cost-effective solution.

The Arduino Robot is the first Arduino-powered vehicle in the world. There are two CPUs on each of the robot's two PCBs. The Motor Board controls the motors, while the Control Board is in charge of reading sensors and determining how they should be operated. Each board is a fully functional Arduino that can be programmed with the Arduino IDE.

Some notable Arduino-based game projects range from retro games on a little screen to more sophisticated projects requiring some assembly.

Some of the Arduino gaming projects are:

Arduino's strong qualities make it ideal for a popular category of applications: automation. The Arduino board can build a wide range of automation projects.

Automation has taken convenience to a whole new level, from managing room lights with your smartphone to automatically arranging events. You can now control all of your home's gadgets from the palm of your hand, rather than utilizing mechanical switches.

Any medical equipment that has internet connectivity and can measure one or more health data of a patient connected to the device, such as heartbeat, body temperature, blood pressure, ECG, steps, and so on, is an Arduino-based patient health monitoring system. If a rapid change in the patient's health occurs, the technology can record, transmit, and alert them.

By this definition, IoT encompasses everything from smartwatches to fitness trackers to pricey hospital equipment that can link to the internet.

New medical gadgets are being produced using Arduino-based health projects. It can monitor things like ECG, temperature, moisture, and heart rate. It also determines the physical condition and location of the patients.

Drones are uncrewed aerial vehicles of various sizes, from micro to multi-rotor quadcopters. A camera may be fitted with a drone, allowing the user to observe and record the bird's-eye view. A drone comprises many components, the most important of which is the flight controller, which serves as the drone's brain.

The Arduino development board is ideal for this, especially because several models to choose from, ranging from the tiny Arduino Nano to the larger Arduino Mega, all of which are small enough to fit into a drone's design.

The Arduino Robotics projects can teach you about electronics, mechanics, and software. It comes with several project examples that you can easily duplicate and a comprehensive robotics platform that you can use to do a range of tasks.

Arduino is the ideal pastime for you if you enjoy working with hardware and software. Arduino is a programmable logic controller that can do a variety of fascinating things depending on your programming skills.

Using the Arduino to create or enhance the music is a distinct "genre" of projects. Some are easy to implement, while others are more challenging.

The Arduino IoT Cloud is a technology that allows creators to rapidly, easily, and securely construct linked goods. Data can be shared in real-time when multiple devices are linked together. You can also keep an eye on them using a simple user interface.

The ease with which an Arduino can retrieve sensor data is one of the features that makes it so valuable.

Sensors are devices that convert a physical quantity, such as light intensity or temperature, into an electrical quantity. For example, a thermocouple produces a voltage proportional to its temperature. Sensors are utilized in various industries, including manufacturing, equipment, airplanes, automobiles, medical, and robotics, to mention a few.

Hope this 'What is Arduino' tutorial gave you a fair understanding of the platform and its features. If you want to learn these technologies and work as a developer or programmer, course certification can help you.

Course certification will assist you in learning Arduino and the programming language and working as a developer or programmer. Enroll in a course on the Internet of Things (IoT).

Please contact us if you have any specific questions concerning 'what is Arduino.' Please post any suggestions or questions on using Arduino projects in the comments section. Our experts will get back to you as soon as possible!