HomeResourcesSoftware DevelopmentPython Tutorial for BeginnersPHP vs. Python: A Detailed Comparison Based On Syntax, Features, Applications & More

PHP vs. Python: A Detailed Comparison Based On Syntax, Features, Applications & More

Lesson 35 of 42By Simplilearn 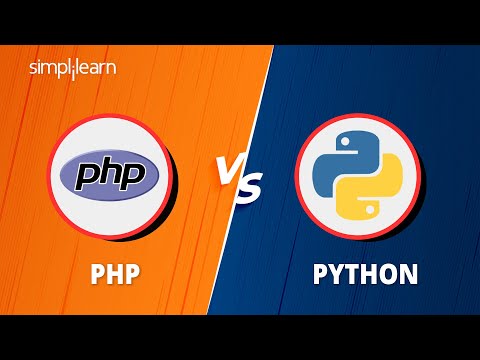 In this PHP vs. Python tutorial, you will explore their differences and similarities and learn what makes them unique in their respective ways.

PHP or Hypertext Preprocessor is a server-side, open-source,  scripting language. It find most use in dynamic web development and when embedded into HTML codes.

PHP comprises 79.8% of all web applications, which nearly translates to 20 million websites and 2 million web servers.

To have a market share as big as PHP, a programming language should have many features that make development simpler and efficient.

Some of the key features of PHP are listed below:

Python has a vast range of applications ranging from web development to AI and data science and hence has a ton of features to support the variety of its use.

Some of the important features of Python are listed below:

Critical Differences in PHP vs. Python

The syntax of a language defines its readability and ease of writing, and in terms of syntax, Python is much simpler and more readable as it resembles a lot with the English language, while PHP has a wide range of conventions which makes it less easy to understand.

Now, look at the syntax of both of these programming languages:

Since Python doesn’t use braces to differentiate parts of code, it has indentation rules to indicate blocks of code and increase readability.

Here, a simple ‘if’ condition checks if 7<10 and if true, it prints the code under the ‘if’ condition’s block. And to print a value, it uses a simple “print”  and the value follows it.

Also, while defining variables, there’s no need to define the variable type.

PHP scripts are usually embedded into HTML codes. A PHP script starts with ‘<?php’ and ends with ‘?>’ while the code comes in between.

In PHP, ‘echo’ is used to print values.

PHP vs. Python: When to Use which?

Although both languages support web development, they are used at different times as per requirements. There’s no one language better than the other.

Have a look at which language is best suited and when amongst the two:

Looking forward to becoming a PHP Developer? Then get certified with the Advanced PHP Development Course. Enroll now!

You can refer to this link here for a video tutorial on PHP vs. Python.

Are you gearing up for a career change into PHP development? Simplilearn’s PHP course would be an excellent first step for you. The PHP certification is an applied learning program which helps you understand the fundamental and advanced concepts, and the latest improvements in PHP - making your PHP learning journey easy and effective.

If you have any queries regarding this PHP VS Python article, share them easily with us in the comments section of this article web page. We’ll have our subject matter experts look into them and share their responses with you soon.