Lesson 27 of 65By Kartik Menon 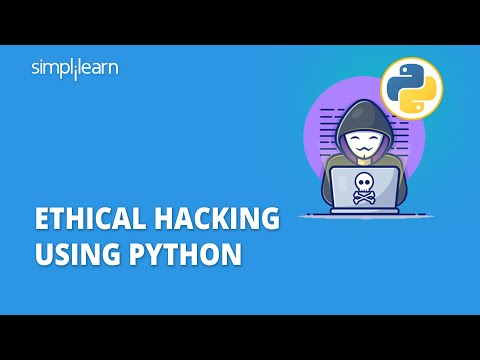 Ethical hacking has become a lucrative industry for cyber security professionals and enthusiasts. With the major tasks of an ethical hacker running on command-line tools, learning a scripting language like Python is highly essential. Python has grown in popularity thanks to various applications in multiple sectors while being a relatively easy-to-learn language. Discovering the benefits of Python in ethical hacking helps beginners write their own customized scripts at the time of penetration testing.

Before moving forward with programming languages, let us cover the basics of ethical hacking.

What Is Ethical Hacking?

Ethical hackers may use the same tactics and tools as criminal hackers, but only with the official's authorization, to improve security and protect systems against harmful attacks. Ethical hackers are supposed to report any vulnerabilities or weaknesses discovered throughout the process to management.

Now that you know about ethical hacking in general, cover the following topic in this tutorial on Python in ethical hacking, which is an introduction to Python.

Like most programming languages, Python works in conjunction with an interpreter, which executes the finished lines of code. There are several resources available to learn the Python coding language. With its syntactical foundation being standard English grammar, it is recognized as one of the easiest coding languages to learn and read.

In the next section, go over some of the benefits offered by Python in ethical hacking and as a programming language in general.

Benefits of Python in Ethical Hacking

In this tutorial on Python in ethical hacking, the next topic will show learners how passwords can be cracked using python programming language and a few lines of optimizations.

You will cover two different variants of how passwords can be guessed using Python. The first is a standard brute-force attack, and the second is a dictionary attack.

In this tutorial on Python in ethical hacking, you learned the basics of ethical hacking and the Python programming language. You also cover some distinct advantages of Python compared to industry counterparts and design a password cracker from scratch using two different approaches. However, this is a singular aspect of ethical hacking, encompassing many other topics and techniques.

Simplilearn offers a Post Graduate Program in Cyber Security that covers all of the areas required for novice and experienced ethical hackers to become proficient. To prepare students for interviews and prospective corporate positions, topics such as network sniffing, enumeration, and risk assessment are taught in a fully detailed approach. Because the information technology industry needs skilled cybersecurity professionals, now is the perfect time to learn about ethical hacking.

Do you have any questions regarding Python in ethical hacking? Please let us know in the comment section below, and we will have our experts answer them for you.