What is a VPN? Virtual Private Network Tutorial

Lesson 23 of 26By Nikita Duggal 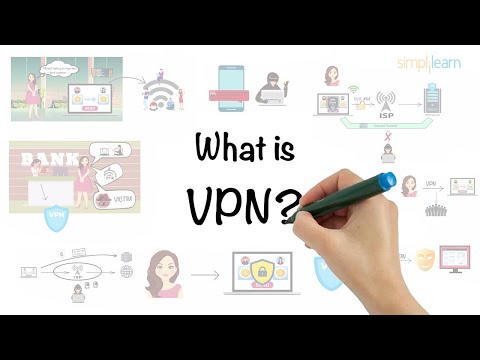 With the increase in the usage of digital platforms for work and important transactions, there is also a high risk of safeguarding our data from cybercriminals. And one such way to prevent our data from being captured is by using a VPN. In this article, we will understand what a VPN is and how it works.

Importance of Using a VPN

Imagine when you are at the airport and make a vital bank payment by connecting your laptop to the Public Wi-Fi. Everything goes well, and you complete your transaction. After a couple of days, you learn that your bank account was subjected to a cyber attack, and a hefty amount was wiped from your account.

After getting in touch with the bank authority, you learn that your account was hacked at the airport and that the Public Wi-Fi you used might have caused this trouble.

Bank officials advise you to use a VPN for future transactions, especially when connecting to an open or public network. Now, let's move on to understanding what is a VPN and how it works.

What Is a VPN?

A Virtual Private Network (VPN) is a connection between a VPN server and a VPN client. It is a secure tunnel-like connection across the internet.

As seen in the figure above, the VPN client connects to the internet by interacting with the VPN server through an encrypted tunnel. Since the communication between the client and the server happens through this tunnel, attackers cannot hack the information.

Now that you know what a VPN is, let us move to the next topic, “How a VPN works?”

How Does a VPN Work?

To understand how a VPN works, let us consider two scenarios:

A Transaction Without Using a VPN:

A Transaction Using a VPN:

Picture your bank transaction to be happening in a tunnel that is invisible to the hacker. In such a case, the hacker will not be able to spot your transaction. And that is precisely what a VPN does. A Virtual Private Network, more often known as VPN, creates a secure tunnel between your device and the internet.

From the above working of a VPN, it is understood that online transactions are safer when a VPN is used.

Now, let's look at the different types of VPN available.

There are primarily two types of VPN categories:

In the next section of this article on “What is a VPN”, we will discuss the various applications of VPN.

Let us now have a look at the applications of a VPN. Using a VPN is beneficial for many reasons.

How to Choose a VPN?

Deciding on which VPN to use depends on your needs. The finest VPNs should secure your internet connection with genuine encryption, connect you to VPN servers with supreme protocols, and provide great service.

Below are a few points that you need to consider while selecting a VPN:

Are You Ready to Become a Network Security Professional?

Given the current scenario, cyberattacks are on the rise now more than ever. So, we have to stay alert and protect our digital information. If you are interested in protecting networks and computers from cybercriminals, a cyber security career is what you should venture into. So what are you waiting for? Get certified with Simplilearn and become a cybersecurity expert.

Simplilearn provides a "Cybersecurity Expert" course that focuses on such cybersecurity techniques and how to protect yourself from cyber attacks. The course is recommended for people looking to join the cybersecurity industry, as it covers basic and advanced modules that cater to beginners and professionals alike.

In today's article on what is a VPN, we learned about the importance of using a VPN, what is a VPN, how it works, and its applications. Do you have any queries regarding this topic? If yes, feel free to drop them in the comment section, and we will be happy to answer all your queries.