HomeResourcesCyber SecurityCyber Security Tutorial: A Step-by-Step GuideWhat Is Kali Nethunter? A Deep Dive Into The Hackbox for Android

What Is Kali Nethunter? A Deep Dive Into The Hackbox for Android

Lesson 57 of 60By Simplilearn 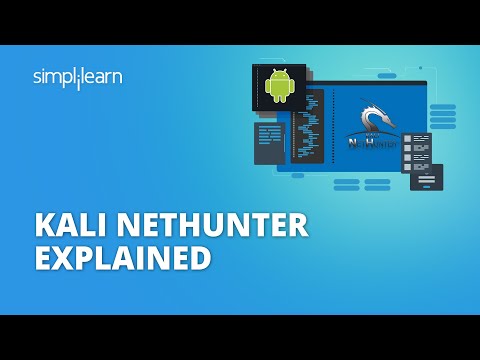 Most of you know Kali Linux, an operating system dedicated to ethical hackers, filled with the relevant tools and scripts. The Debian-based operating system has been a trusted ally of cybersecurity professionals for nearly a decade now. However, not everyone has the necessary hardware to run their own instance of Kali Linux, which is where Kali Nethunter comes into play. This tutorial will explain how Kali Nethunter works and its different versions.

What is Kali NetHunter?

The NetHunter interface allows users to work easily with complicated configuration files through a local web interface. Aside from this functionality, modified kernels that handle 802.11 wireless injections and securely link preconfigured VPN service comprise a strong network security breakthrough and a separate dropbox with Kali Linux constantly at your disposal.

There are multiple variants of the Kali NetHunter framework. You will learn all about their differences.

What Are the Different Versions of NetHunter?

There are broadly three versions of the Kali NetHunter framework.

The table below can highlight the differences between the three much more clearly.

In this tutorial on what is Kali NetHunter, you will now cover how the NetHunter works.

How Does Kali NetHunter Work?

You will look at the various NetHunter components, which are effectively the building pieces of NetHunter's operation. The NetHunter's ROM comprises various pieces that communicate and rely on one another to function properly. Below, you will look at the three components that comprise NetHunter. The first is a modified Android Kernel, followed by a Kali Linux Chroot, and finally, but not least, a NetHunter Android app. You will now examine each of them in-depth to have a comprehensive understanding of NetHunter's operation.

Now that you know the various components of kali NetHunter, go through some of the most popular attacks in this framework.

You have now covered the most popular attacks and features of the NetHunter framework in this tutorial on ‘what is kali NetHunter’. For better clarity, go through some of the advantages and disadvantages of Kali Nethunter in the next section.

Advantages and Disadvantages of Kali NetHunter

That being said, you have reached the end of this tutorial on ‘what is kali NetHunter’.

In this tutorial on ‘what is kali NetHunter’, you understood the importance of this framework while going through its components, features, and distinct advantages. Though it is catered to ethical hackers, most professionals in this line of work usually stick with the fully-featured Kali Linux after getting certified in ethical hacking.

The Certified Ethical Hacking Course v11 offered by Simplilearn can help you take the first step in the ethical hacking industry and, subsequently, the cybersecurity domain. From theoretical concepts like Information Security and basic terminology, intricate topics like vulnerability analysis and session hijacking are taught conveniently. With the market looking for more and more trained personnel every day, cybersecurity and ethical hacking have a bright future, and it's highly recommended to get in on the ground floor.

Do you have any doubts about what is kali NetHunter? Please let us know your queries in the comment box below, and we will get back to you as soon as possible.