Lesson 22 of 32By Simplilearn 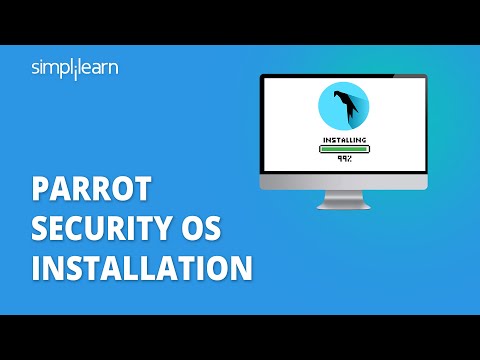 In the last few decades, penetration testing and ethical hacking have significantly grown in popularity and industry demand. From learning the dangers of the internet to safeguarding data against hackers, the software market has become rather vigilant of the potential millions they stand to lose in the event of a breach. To further promote this level of awareness, Parrot Security OS has been developed as an operating system catered to ethical hackers.

In the first section of this tutorial, you will learn about the importance and relevant details of such a niche operating system.

What Is Parrot Security OS?

Parrot Security OS is a Linux (specifically Debian) based operating system designed for ethical hackers and penetration testers and was initially launched in 2013. Parrot OS may be viewed as a completely portable laboratory for a wide range of cyber security operations ranging from pen testing to reverse engineering and digital forensics. But, it also contains everything you need to safeguard your data and build your own software.

Parrot OS is often updated and offers a wide range of hardening and sandboxing options to users. The distribution's utilities are designed to work with most devices using containerization technologies such as Docker or Podman. Parrot OS is exceptionally lightweight and runs surprisingly quickly on all computers, making it an excellent choice for outdated hardware or limited resources systems.

It features a distinct "Forensics Mode" that does not mount any of the system's hard discs or partitions and has no influence on the host system, making it more stealthy than its regular mode. This mode is used on the host system to undertake forensic procedures.

To run the parrot security operating system on a device, the minimum requirements are relatively modest, as can be seen in the next section.

What Are the System Requirements for Parrot Security OS?

The minimum system requirements to run a full-fledged installation of parrot security are as below:

Despite its meager requirements, the performance of parrot security has always been top-notch. Now, look at its distinct features as an operating system.

Now that you are well aware of parrot security's unique offerings for professionals, look at the variety of ways a user can go about when installing the operating system.

There are four primary ways how one can use the Parrot OS.

With this, you have covered all the planned topics on Parrot security.

This tutorial taught you what parrot security OS is, its minimum system requirements, distinguishing benefits, and the many ways we may utilize it during penetration testing during installation. With parrot security being the go-to Linux distribution for ethical hackers, it must be used in conjunction with appropriate study material. Because the operating system has been fine-tuned for professional and personal usage, tutorials for the necessary tools and techniques are also expected to be top-notch.

Simplilearn offers a Post-Graduate Program in Cyber Security course that covers all the topics beginners and intermediate professionals need in the ethical hacking sector. Major topics like network sniffing, enumeration, and malware analysis are covered to prepare learners for their interview process and eventual corporate experience. With the IT industry looking for trained cybersecurity personnel, the time has never been more perfect to start your first course in ethical hacking.

Do you have any questions about this tutorial about parrot security OS? Please leave your questions in the comments box below, and we will respond as soon as possible.