Parrot OS vs Kali Linux: Which is better?

Lesson 21 of 65By Simplilearn 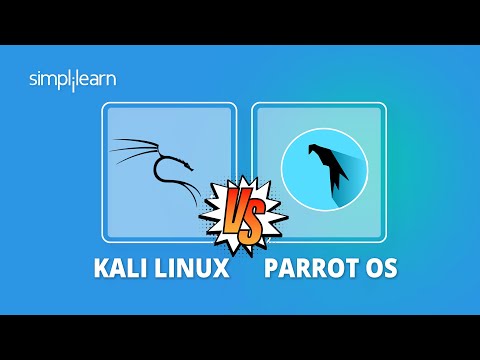 Ethical hacking has become a necessary investment point for organizations worldwide, owing to the number of data breaches growing exponentially. With penetration testing as an essential skill to master, operating systems like Parrot Security OS and Kali Linux have become a vital cog in every ethical hacker's arsenal. With this tutorial, you will explore the much-debated topic of Parrot OS vs. Kali Linux and know a few pointers on which operating system is more likely to suit your workflow.

Now, start this lesson on Parrot OS vs Kali by learning about Kali Linux from scratch.

It is a cross-platform solution that is simple to use and free for information security professionals and enthusiasts. Debian has been a very trustworthy and stable distribution for many years, providing a solid foundation for the Kali Linux desktop.

Now, look at some of Kali Linux's most prominent features being offered to its customers.

With the basics of Kali Linux covered, you will now look at the newer operating system in the market and Kali Linux's direct competition, Parrot Security OS.

What Is Parrot Security?

Parrot Security OS is a Linux (particularly Debian-based) operating system first released in 2013 for ethical hackers and penetration testers. Parrot OS may be thought of as a portable lab for a wide range of cyber security management ranging from pen testing to reverse programming and digital forensics. It also includes everything you need to protect your data and create your software.

Parrot OS is often updated and provides users with a wide range of hardened and sandboxing options. The utilities in the package are meant to work with most devices that use containerization technologies like Docker or Podman. Parrot OS is exceptionally light and runs surprisingly rapidly on all PCs, making it an excellent alternative for systems with old hardware or low resources.

It has a separate "Forensics Mode," which does not mount any of the platform's hard discs or volumes and has no effect on the host system, making it much more stealthy than its usual mode. On the host system, this mode is used to perform forensic procedures.

Now, you will directly compare features in this parrot OS vs Kali Linux tutorial in the next section.

Despite such unique offerings, every user will have a particular use case to which they need a definite answer. To know the right operating system for you, you will categorize each OS's user base in the next section.

Which OS to Go For?

With this, you have reached the end of this tutorial on Parrot OS vs Kali Linux.

In this lesson, you learned about Kali Linux and its distinct features and followed by examining its direct competitor in parrot security os. With both Kali Linux and parrot security OS at the helm, budding ethical hackers and penetration testers have a lot of scope in their learning path. Beyond the choice of an operating system, learning the intricacies of such software and tools are arguably more crucial for a complete preparatory curriculum.

Simplilearn provides a Post Graduate Program in Cyber Security course that covers all of the topics required by novices and seasoned professionals in the ethical hacking field. Major subjects like network probing, enumeration, and vulnerability assessment are presented in order to prepare students for their interviews and subsequent corporate job roles. With the IT sector in desperate need of qualified cybersecurity workers, there has never been a better moment to take your first step into ethical hacking.

Do you have any queries for us regarding this tutorial on parrot os vs Kali Linux? Please let us know your thoughts and questions in the comment section below, and we will get back to you with an answer.